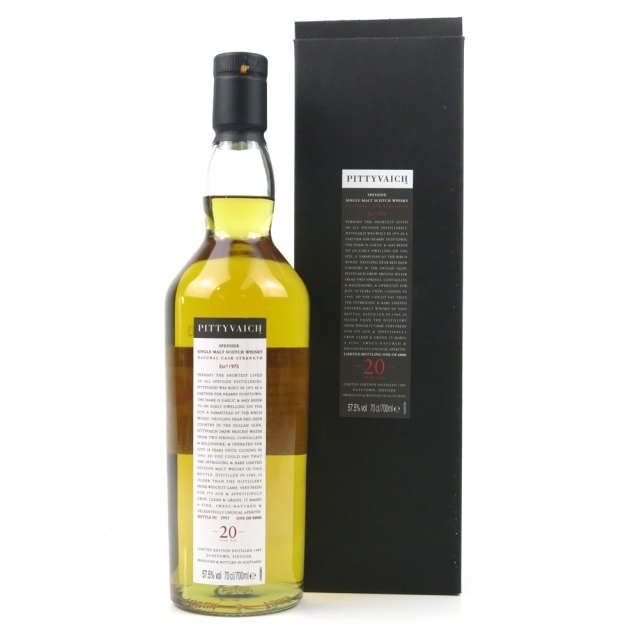 Distilled in 1989 then aged for 20 years in refill American Oak casks and then bottled in 2009 at its natural cask strength of 57.5% ABV.

It is a limited edition of only 6000 individually numbered bottles and had a RRP of £115.

A survivor of more years than the distillery that produced it. Pittyvaich was established in 1974 to produce bland filler malt for Bell’s blended whisky, it produced until 1993, operating for a mere 18 years and was demolished in 2002. Quoted as a victim of both industry boom and bust, though folk that have sampled much more Pittyvaich than I have are convinced it was shut as what they produced really wasn’t very good. Rarely released as a single malt though it did appear as a 12 year old in the Flora and Fauna range and more recently it seems a batch of 1989 stock was released as a 20 (in 2009 i.e this one) and 25 (in the 2015 special releases) – perhaps we can look forward to a 1989 vintage Pittyvaich 30 year old in 2020! – Nah they wouldn’t be that predictable – would they…?

Anyway back to this expression at hand – it arrived to me courtesy of some sample dealings with Sjoerd at Malt Fascination. The expense of international mailing warranted bulking out of parcels and this was one of the extra samples available. Having not tried anything from Pittyvaich previously I opted for this to tick that box. Having been thoroughly pre-warned by Jason & Mark at Malt-Review not to have too high expectations. Still – sampling from a new distillery is now a rarity for us so it was enjoyed with all the pomp and circumstance that warrants.

I can’t believe that even at 20 years old this is far too spicy and redolent of under-ripe fruit flavours. The cask influence ranges from raw/shaved green oak wood to damp, mould and mushroom-infested. Under-active cask – yes, poor spirit, hmm probably. Interesting but not really my cup of mushroom tea, I’d certainly be unhappy if I paid the asking price for this expression. Water didn’t do it many favours.