Our single malt was introduced to the market back in 1996 using whisky produced in 1986, the last year that Long John International produced whisky at Ben Nevis distillery. Initially sales were very slow until we packaged the bottle in a presentation tube since when this has gone on to become our largest selling whisky. In Jim Murray’s “Whisky Bible 2004” he says this:- ‘such a massive introduction to the palate: soft oils, citrus notes and very big oak on the malt, but sweet enough to chew forever; the integration of the oak really makes for some finish: long, hints of bitter roast coffee against the sweet oils; the nose makes you say oh-oh, but you need a knife, fork spoon and napkin for the taste’. 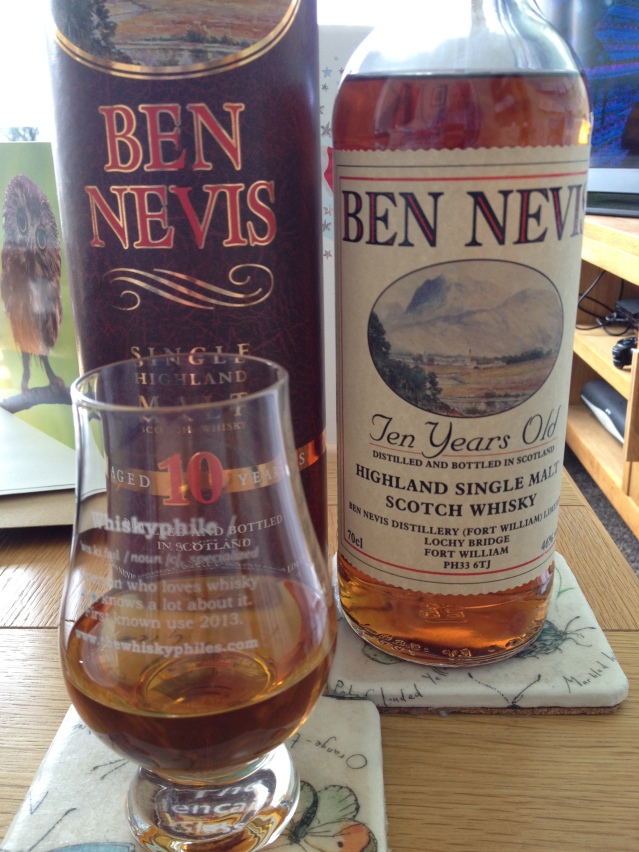 Having sampled several Ben Nevis expressions recently that had really tickled my taste-buds I was on the lookout for more when I found a bottle of their standard (Official Bottling) 10 Years Old. I was in luck as my birthday was rapidly approaching and so this immediately went onto my wishlist and was promptly purchased for me by Paula. Then came the wait before I could crack this open!

This is a lovely expression, brimming with character and very typically adhering to the ‘West Highland’ flavour profile. There is a generous dollop of sherry-influence in here, enough peat to gently declare its presence without being overt. Plenty of sweet and spiced savoury really appealed to my sweet-tooth (or dessert stomach!). Overall I was very pleased with this present and wish I had discovered it sooner!