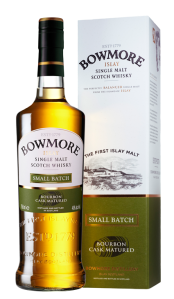 On the eye warm gold. 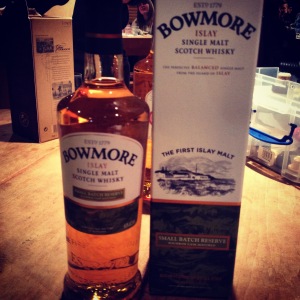 Dram #5 at the WOLS Burns Tasting 22/01/2015 was this Bowmore Small Batch – Bourbon Cask Matured release. This no-age statement (NAS) release was originally released as the Small Batch Reserve Bourbon Cask Matured before being repackaged with the word Reserve taken out. Presumably this must have been to prevent any confusion surrounding the idea that Bowmore distillery were producing small batch Bourbon Whiskey (instead of scotch single malt matured in ex-bourbon casks) – one can only assume? At present this appears to be Bowmore’s entry-level malt

Pleasantly surprised. There were some tasters to whom this was not appealing. Compared against some of the other recent very citric and zesty lemon/limey Bowmore expressions I was really impressed. For an entry-level malt this has some depth of malt and peat and some complexity and real body to it, without revealing too much zesty youthfulness. I would happily dram this at this price!