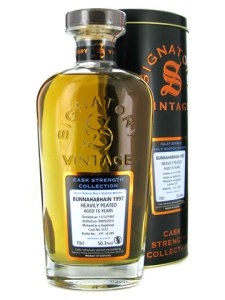 Tasting notes from the RMW staff

Nose: Heavy and rich with a sensible and enjoyable level of peat. Malty and sweetened butter notes breaking through.

Palate: Lots going on on the palate with an initial sweet brine and peat rush leaving a peppery mouthfeel and taste.

Overall: An interesting and enjoyable dram which scored highly in a blind tasting.

Every year Bunnahabhain switch over to distillation of spirit from a batch heavily peated malted barley (one would presume from the Port Ellen maltings on Islay, though mainland maltings will happily provide malted barley to similarly high phenolic ppm [peat levels in layman’s terms]), a far cry from their usual pretty much un-peated standard malted barley. In fact I suspect most of the peat normally in Bunnahabhain expressions arises from the water source used rather than introduced when drying the malted barley. So this is what you get when Bunnahabhain produce a more traditional Islay style whisky.

Long, although the peat lingers to the finish it is so powerful up-front in the nose and palate you almost forget about it, but it does linger

Yes! I still prefer the traditional ‘un-peated’ style of Bunnahabhain which they do so well, however this captures the essence of that and incorporates a healthy dose of peat smoke too. Rather than overpowering it feels more like drinking standard Bunna at a barbecue on an Islay beach bonfire with a cigar… nom nom nom… I would definitely recommend anyone try a peated Bunna (either the Toiteach official bottling or Indie bottlings like this one from Signatory) just to taste the difference.