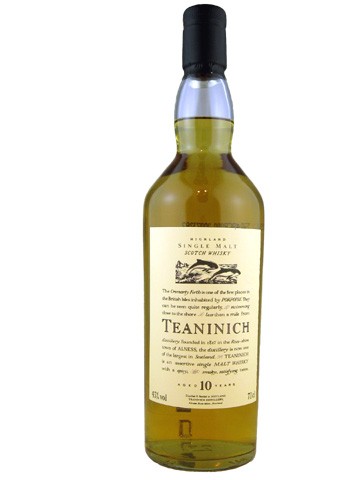 Not a lot! so here is an excerpt from http://www.scottishwhiskystore.com/teaninich/

“Founded by Captain Hugh Munro in 1817 Teaninich distillery was built on the Captain’s estate which is located in the Scottish Highlands just north of Inverness.  Its better known neighbour Dalmore is located nearby on the banks of the Cromarty Firth.  However Teaninich is somewhat more understated and is hidden away on the edge of the village of Alness in what is now an industrial estate.  Teaninich claim to fame is that it was one of the first whisky distilleries with electricity, indeed it was at the forefront of modern methods (for the highlands) with telephones and living quarters for the Excise man.

The Captain kept Teaninich going until 1945 before handing the distillery to Lieutenant-General John Munro (local philanthropist) in 1845 but he was posted by the military out to India a few years later and leased Teaninich to Robert Pattison followed shortly after by John McGilchrist Ross. Two Elgin whisky merchants took up the tenancy for a few years before the Munro family transferred ownership into a business called Munro and Cameron. Robert Cameron becomes sole owner a few years later adding to his portfolio which included Tamdhu, Linkwood and Benrinnes. However like many whisky distilleries the next part of the ownership story may sound familiar. Teaninich was sold to Scottish Malt Distillers in 1933 and fell silent during World War 2 and was taken over by Diageo some time later.

Investment started to flow into the whisky distillery over the 1970’s and 1980’s with the still house being refitted, steam replacing the coal furnaces and an additional 3 pairs of stills added. Much the distillery was rebuilt and would be largely unrecognisable to the founders today. This split the distillery in 2 parts and the older of the parts was mothballed in 1985, both sides were mothballed at this time but the newer distillery was re-opened in 1991.  A year later the first official bottlings of single malt scotch whisky was released by Teaninich.

Taste: Most describe Teaninich as Malty & Fruity both on the nose and palate with a gentle smoke in the finish.”

Received as a Christmas present this 5cl Drinks by the Dram sample I expect would be around the £4-£5 mark. I have a sneaky suspicion I have tried this before whilst visiting one of Diageo’s distilleries (perhaps Cardhu or Glenkinchie?). Anyway having a sample at home allowed us to sit down, enjoy and mull over this whisky properly for a review.

The more we drank of this the more we started to warm to it. I am not sure if I would want a full 70cl bottle but I was beginning to think by the end of this dram that it would likely disappear rapidly if I did. Paula suggested this is a great starter whisky [i.e. for whisky novices] as it is drinkable and not too complex though there is a little sour note within it that may not be to everyone’s liking. My overall opinion was that this is smooth, mellow, buttery and rounded – very pleasant but not dripping with character or depth. I expect this would make a good blending whisky or a finishing whisky – for example I would love to find out what a year or two in port pipes may add to this basic expression?