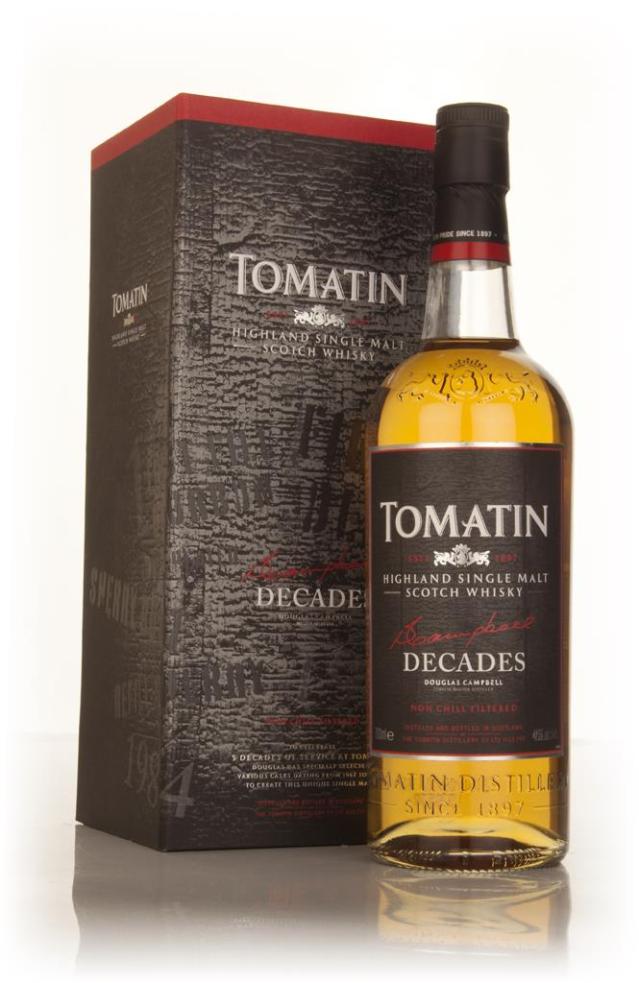 This unique Single Malt was crafted to celebrate one man’s lifetime commitment to the Tomatin Distillery. Native to Tomatin, Douglas Campbell had worked for the distillery since 1961 in a number of positions before taking on the role of Master Distiller in 2008. In his role, he spent much of his time assessing the thousands of casks that lie maturing in the vast warehouses of Tomatin or travelling around the world promoting the distillery’s single malt.

In recognition of his 50 years service at Tomatin, Douglas created a Single Malt using whiskies distilled in each of the 5 decades he worked at the distillery. Starting with a 1967 cask and moving through each of the subsequent decades to the year 2005, Douglas chose whiskies that not only have very distinctive individual characteristics but are also versatile enough to marry together to create a single malt that is a genuine one off.

Called simply ‘Decades‘, this single malt is a marriage of maturity and youth. It is a coming together of sherry and bourbon influenced whiskies, of differing ages, to create a single malt that has great depth of flavour but also a youthful charm that helps to invigorate the taste buds.

Douglas’ comments on the whiskies used to craft this single Malt:

1967 – Refill sherry hogshead
Distilled on the 17.05.1967
“This is some of the oldest Tomatin in existence. It’s a sherry influenced whisky with subtle flavours of beeswax, stewed apples and orange peel. It takes a little time and effort to identify its characteristics in the finished product, but they are definitely there!”

1976 – Oloroso Sherry Butts
Distilled on the 07.12.1976
“ Tomatin in its 30’s is a fruity animal indeed, especially when locked inside a sherry cask. Passion fruit, blackberries and honey dew melon are big flavours that help to tone down some of the more robust flavours that are present in the younger whisky.”

1984 – Refill sherry Hogsheads
Distilled on the 21.06.1984
“These casks were part of fantastic parcel of re fill sherry hogsheads that I stumbled across several years back. These are some of the best I have encountered at Tomatin and I think they give the whisky real body and depth. It is definitely worth looking out for a 1984 single cask bottling in the future!”

1990 – First Fill Bourbon Barrels
Distilled on the 24.09.1990
“Vanilla, raisins and toffee are the dominant flavours here. This whisky has a big personality and wants to be noticed, however, it is being kept in check by the 1976 and 1984 which have equally big characters! “

2005 – First Fill Bourbon Barrels
Distilled on the 07.12.2005
“Young and invigorating. The youthful vibrancy works well with some of the deeper flavours of the older whiskies. This delicately peated whisky adds an element that you might not associate with Tomatin, nevertheless I think it works well in the overall scheme of things”.

Released in 2011 to celebrate Douglas Campbell’s 50 years service at Tomatin Distillery, this was constructed using whisky produced in each of the 5 decades he worked, mixing classic old Tropical Fruit filled Tomatin with younger more vibrant whisky and also mixing sherry and bourbon cask matured stock to produce this wonderful expression.

Nicely balanced fruity a hints of hidden depths of oak and zest, subtle elements of tropical fruit, smoke and oak too.