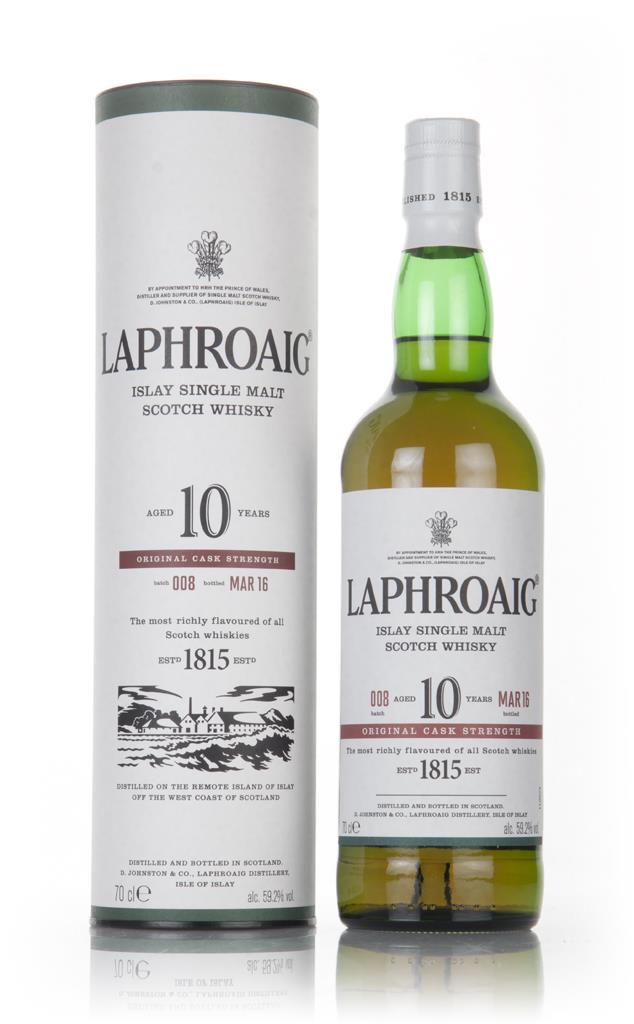 Original Cask Strength Laphroaig is bottled at natural distillery strength with all the depth of genuine taste and texture normally associated with sampling whisky at source.

We mature Laphroaig in seasoned oak barrels, charred before filling to impart a slight sweet vanilla nuttiness. Original Cask Strength Laphroaig is barrier-filtered only just, to remove the small char particles present. This means you will enjoy Laphroaig exactly as we made it.

In extremes of temperature and when you add water it may appear a little cloudy – this is the natural condition of a malt of such a peaty pungence and uncompromising purity. Adding a little water releases a rich aroma of peat smoke with some sweetness and strong hints of the sea.

Emphatic, full bodied and utterly unforgettable – we like to think it’s the purists choice.

Long considered as one of the ultimate Laphroaig expressions, the 10 year old Cask Strength batches are released and sold directly from the distillery and usually sell out as soon as they are available. I have long been a fan of the standard Laphroaig 10 year old and usually have a bottle open (though surprisingly I haven’t reviewed it yet here on The Whiskyphiles!). With batch 009 announced in February 2017 and delayed until May, I dug out last years bottle and realised to my horror that there was only a few drams left in it and most had been enjoyed and not reviewed!

A great combination of fierce spirit and equally sturdy oak wood cask influences – borders on bourbon in places makes for a superb balance and brings out some oddly fruity suggestions on the palate – I love this stuff and it’s preceeding reputation is very well deserved.