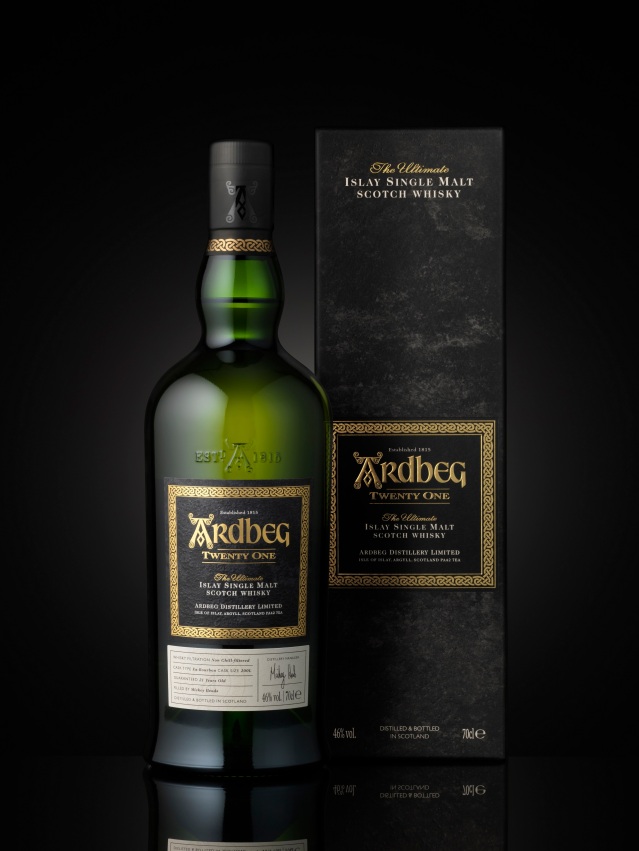 ARDBEG TWENTY ONE LAUNCHES TO CELEBRATE DISTILLERY’S MOST PERILOUS DAYS

Ardbeg has announced that its latest Limited Edition whisky is a 21 year old single malt, distilled at one of the most turbulent times in Ardbeg’s history. A testament to the dedication of those who fought through the Distillery’s darkest days to keep its untamed spirit alive, Ardbeg Twenty One will be released exclusively to Ardbeg’s loyal following, the Ardbeg Committee, in recognition of their vital role in safeguarding the Distillery’s future.

Ardbeg’s precarious past – and its enduring hold on the future – are celebrated in the rare, Limited Edition Ardbeg Twenty One. This golden expression began life on Ardbeg’s remote Scottish island home in the mid-1990s.  Its whitewashed walls were faded and crumbling, and distilling at Ardbeg had dwindled to almost nothing. A small group, including the young Mickey Heads (now our esteemed Distillery Manager), set aside a small number of casks for Ardbeg’s future – including some containing whisky distilled during those perilous days when the Distillery’s future was still uncertain.

Today, Ardbeg’s future is in safe hands: the Ardbeg Committee, formed to prevent the Distillery’s doors ever closing again, is 120,000-strong, with members in more than 130 countries.  Mickey Heads, who is the Chairman of the Ardbeg Committee, said: “Ardbeg Twenty One is a shining example of Ardbeg’s enduring spirit.  I’m so pleased we can share it with our members.  The Committee have invested much in ensuring the future of the Distillery and it’s only right that they should share the rewards of its turbulent past too.”

Dr Bill Lumsden, Director of Distilling, Whisky Creation & Whisky Stocks at Ardbeg, said: “I selected the casks for this sumptuous, golden whisky as they combine the distinctive, peppery smokiness of Ardbeg’s award-winning malt with soothing, buttery qualities.  Born from adversity, Ardbeg Twenty One is the perfect dram to celebrate the resilience of Ardbeg and The Ardbeg Committee’s enduring loyalty.”

Ardbeg Twenty One is non chill-filtered and bottled at 46% ABV. It is priced at £310 and goes on sale to committee members on 21st September 2016.

Ardbeg Twenty One is non chill-filtered and bottled at 46% ABV. This pale gold whisky contains aromas of tarry smoke, Ardbeg ice-cream and black pepper, with herbal top notes.  Its peppery, fizzy mouthfeel gives way to tastes of liquorice, charcoal, peppermint and vanilla with a dash of spice, leading to a long, soothing finish of coal tar, aniseed and smoky butter.

At long last another age statement whisky officially bottled by Ardbeg. Discussing just this proposition with Dr. Bill Lumsden [Head of Distilling & Whisky Creation at The Glenmorangie Company.] at the bicentennial Ardbeg day in 2015 revealed the difficulties in achieving this. According to Dr. Lumsden he was astonished following Glenmorangie’s purchase of Ardbeg to find that the variability generated in the Islay warehouses was enormous. When compared to the conditions at Glenmorangie, the Ardbeg warehouse on the Islay shoreline offered up a vast array of cask abv, evaporation levels and quality variations such that finding enough stock to accurately marry together an age-statement whisky was improbable. Therefore perhaps in deference to Ardbeg’s adversity, battered by the wind and sea on the Islay shoreline, and its fluctuating fortunes – this whisky really is quite special. Reportedly constructed from whisky matured in ex-bourbon casks. Many thanks to Ardbeg and Quercus Communications Ltd. for the official sample.

Vanilla buttercream, oysters & shellfish [sodium/calcium salts], honey, malty cereal barley – slightly umami, this is tangy on the back & sides of the tongue but creamy on the middle of the tongue, highly polished toffee, spun sugar, this reminded us of phenol/chloroform DNA extracts in the lab but performed on smokey bacon crisps

What a wonderful expression, as peat influence tends to diminish with age, it seems here captured in all its beauty in a moment in time, tempered in a crucible with that ozone-y chemical heat aroma, wrapped in sweet vanilla, salty maritime shellfish leaving a long calcified peat ash finish.