A single cask bottling of Arran malt whisky from Whiskybroker Limited. Distilled on the 5th August 1996 filled into a hogshead cask and finished in an oloroso sherry octave and later bottled at natural cask strength on the 15th January 2015, producing 81 bottles at outturn. 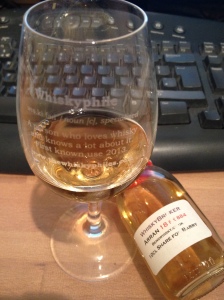 The final in the trinity of new 18 year old Arran bottlings released January 2015 by Whiskybroker was finished in a Pedro Ximenez conditioned Octave cask, again relinquishing just over 80 bottles.

Deep and dark and musty, pungent and almost dank, bitter chocolate and spiced gingerbread, lots of red fruits, plum and strawberry, hints of treacle toffee and molasses, a little fig jam and chutney in here too, a nice musty dunnage warehouse of oak wood and  worn leather couch

Possibly the best of the 3 Arran 18 year old expressions in my opinion, though this may have been subject to my PX bias. It is not quite as nutty and chocolatey as some but delivers a lot of flavour in depth and well structured. The fruit and malt are a lot darker than usual for Arran, which is a superb!