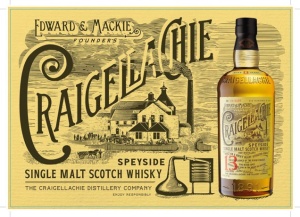 Craigellachie distillery sits nestled in the heart of Speyside atop a rock overlooking the confluence of two great rivers, the Fiddich and the Spey. The distillery was built by Peter Mackie and Alexander Edward in 1891 and still uses traditional worm tubs giving the resulting malt a distinctive meaty, sulphury character.

Light and smooth, vanilla, cereal barley, blossom honey, crisp green apples, a spiced bite to it, like a light dusting of cinnamon on said apples, a little green malt

A great start to the entry-level stable from Craigellachie, the heavy copper influence of the distillation and especially the condensers has been well presented here in amongst some honeyed fruit (i.e. Speyside style) and nice ex-bourbon matured (vanilla and cinnamon) influences. Well balanced if a little thin in places, revealed as a little too green and spritzy in the apple flavours – if anything this lets the meaty, copper and sulphury elements be revealed. This has been described as both old-fashioned (i.e. whisky made in the old style with plenty of copper influence) and traditional/adhering to Craigellachie’s founding principles. In many ways this ticks those boxes adequately, it may not be to everyone’s liking, but for an entry level whisky this is palate-challenging in a good way and ideal fodder for tastings as a Speysider with a lot of individual character.