A 23 year old single malt from the dearly departed distillery, Imperial. Distilled in October 1990, the whisky matured in a single sherry butt for 23 years before Hunter Laing came along and bottled 302 bottles of it for the Old & Rare Platinum selection.

Whisky sweet Christmas Pudding on the nose with sherry toffee and vanilla notes. It is initially sweet to taste with sherry-soaked sultanas and raisins. A long, satisfyingly sweet finish with a touch of sherry wood. 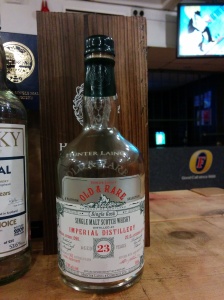 The 6th and final dram from Thomas McEntee’s Imperial Tasting for the Water Of Life Society held on 12th March 2015. This Imperial expression was distilled in October 1990 and matured a full 23 years in a sherry butt, producing 302 bottles at cask strength of 57.9% ABV at outturn in November 2013.

My favourite expression of the tasting, some deep rich woody sugars in this on display its age well. The sherry influence is subtle but persistent and the fruitiness has definitely gone over into the truly tropical section. Just wonderful!