This unique range of malt whiskies has initially been matured intially in American oak casks for at least 10 years and transferred into casks that have previously contained either Burgundy,  Madeira, Port or  Sherry, for a further period of maturation.

The Glenmorangie Wood Finish Range is an exceptional range of malt whiskies that can be served confidently at any time, but is best served after dinner.

Nose: At full strength, the confectionery sweetness of candied honeycomb in milk chocolate stimulates the senses, with aromatic top notes of spearmint and simmering coffee. With water, the aroma is reminiscent of a summer fruit pudding – a burst of intense ripe fruits with plums, raspberries, figs and banana softened by sponge and cream; a dusting of cinnamon and nutmeg spice, and covered with flakes of sugared almonds.

Taste: Rich, fruity and sweet with an intriguing range of mouthwatering and tingly flavours.  The taste meets all the expectations promised on the nose with balanced sweetness, fruit and spicy notes.  Initially, there is a burst of mouthwatering plums and raspberries, followed by tingly spices (cinnamon and nutmeg), and progressing to a lightly mouthcoating effect, reminiscent of sucking boiling sweets (oil of cloves).   Later there is the gentle dryness of cocoa powder, grape must and almonds. 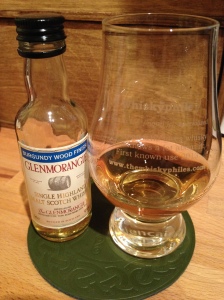 Part of Glenmorangie’s Wood Finish range, we found a good haul of these mini’s still left at the Glenmorangie Visitor Centre on a recent trip to the Highlands and so snapped some up for sampling. This expression was American Oak cask matured initially, then transferred into Cote d’Or ‘barriques’. Discontinued in Summer 2007.

A very enjoyable expression, the red wine finish has leant an earthy tannic fruitiness to this expression – redolent of that earthy cranberry or elderberry fruity flavour. Some of the initial Glenmorangie spirit and touches of the initial maturation also add elements to this. A shame this is no longer widely available.