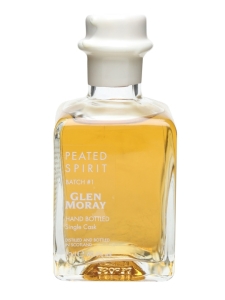 A small bottle of a new style of spirit from Glen Moray – peated. This is the first batch to be commercially released, in a 20cl bottle, and isn’t yet whisky, having not been aged for 3 years. An interesting, and rather tasty, sign of things to come from Glen Moray.

Rather an unusual sampling this one as it is not even whisky yet! Usually non-whiskies sampled tend to be in the flavoured/diluted category, generally though we have sampled numerous New Make spirits there is not much for us to construct tasting notes on. However, this was so good that the folks at Glen Moray really wanted other people to try this – and so at only 2 years old they released a small batch of matured spirit that had been distilled from peated barley. It is no surprise that the distillery’s ownership changed just a little over 2 years before this was made – indicating a new and interesting direction for Glen Moray – following in the footsteps of Knockdhu distillery who produce a peated range of anCnoc Speyside whiskies.

We sampled this at the Edinburgh Whisky Stramash 2014

This is certainly punchy and very peaty. Still vigorous and un-tempered there is a lot to get excited about in this 2 year old spirit drink. It is likely Glen Moray will not be releasing this as whisky until they are sure it is ready. In the current climate my guess would be a no-age statement peated Glen Moray expression may hit the shelves in 4-7 years unless they adopt the Kilchoman route and start releasing smaller batches from 3yo onwards and keep introducing slightly older stock into the mix. Either way this is definitely one to watch out for!