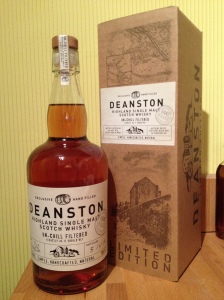 Distilled in 2004 and matured for 9 years in an ex-bourbon cask before spending 12 months in an ex-Amontillado Sherry cask; this is the 2nd bottle-your-own cask available at Deanston distillery after their 1st bottle-your-own Oloroso cask finish .

Our second Bottle-Your-Own from Deanston distillery (well 3rd if we account for Deanston 12 Years Old Marsala Cask Finish – Festival 2014 ~ 57.2% (Distillery only) ). After the success of the Oloroso cask finished whisky, this time they have selected a whisky that has spent 12 months finishing in an ex-Amontillado sherry cask.

Light in mouthfeel than the nose suggests, this kicks off spicy with chilli heat and cinnamon before mellowing to toffee oak, leather, tannic, cigar box and tobacco leaf, their was also the faintest of sulphur hints like rubber bicycle tyres and inner-tubes, feisty and slightly youthful, coffee and cocoa hints (mocha) linger

Another interesting expression from Deanston. This one perhaps needs a little time to air or a drop of water perhaps (as did the Oloroso) just to calm down the high ABV and feisty flavours. The toffee/butterscotch core of the Deanston spirit is here and there are light tobacco and leathery notes derived from the time in the Amontillado cask. Being one of the 1st bottles out of the cask this may still be a bit spritely for me but I bet these bottles will improve as it breathes a little during its time in the visitor centre and I expect latter bottles may benefit from that. I, however, am just happy that Deanston are trying these cask finish experiments as they reveal much more about the nature of the underlying spirit with each sampling.