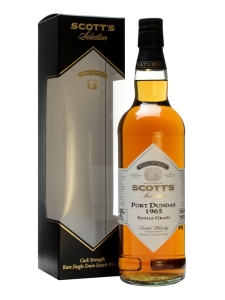 A 1965 vintage Port Dundas bottled by independent bottlers Scott’s Selection in 2012. Port Dundas closed in 2010 and given it was very rarely seen as a single grain, bottlings are in high demand. 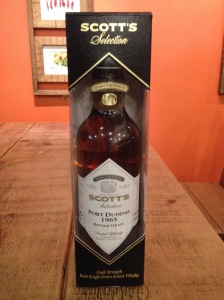 Port Dundas single grain whisky, distilled in 1965 and bottled at 43.6% in 201 (hence ~ 47 years old). This was the final dram from the Water of Life Society EWB Greatness of grain tasting.

Wow a rich, oak infused, single grain. This has spent a long time in the cask and has developed an intensity of colour and character from the oak wood. Gone are the vanillins and replaced by a deep rich herbal sugariness. In fact just drinking this whisky from 1965 made us wonder about the history it has lived through! 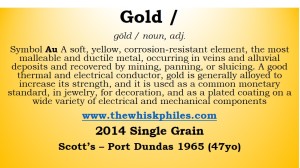