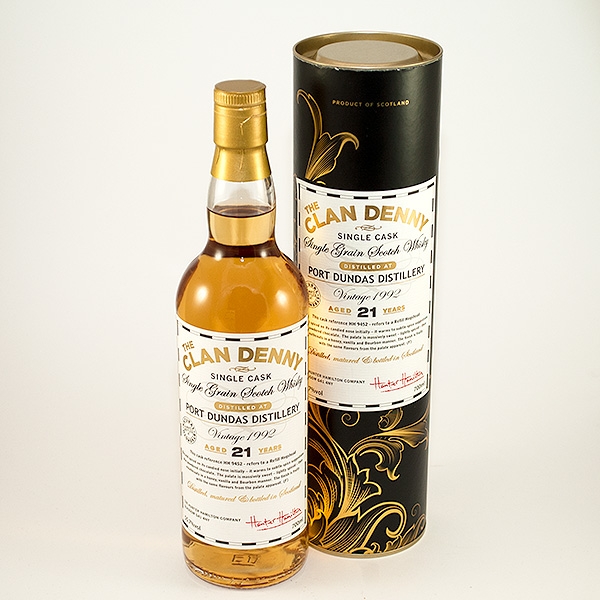 We select only the finest casks which have been lying untouched in cold, dark and damp Scottish warehouses for many decades.

Typically our aged Single Grain whiskies have a deliciously sweet and distinctly fruity character as a result of many years in the finest oak casks during maturation.

With all the furore around Grain whiskies and particularly aged Grain Whisky or on the other end of the spectrum ‘hip’ grain whisky that comes in an aftershave bottle and is pimped by some famous footballer (sadly all true…), I decided I should probably try some more. Thankfully I selected the former category and managed to get hold of a small number of samples from Port Dundas. Port Dundas on the outskirts of Glasgow used to produce just under 40 million litres of alcohol as part of the Diageo portfolio. The majority went to blends such as Johnnie Walker, J&B’s, Bells, Haig, Vat 69, Black & White and White Horse. Diageo shifted production of all its Grain whisky to Cameronbridge and  North British Distilleries, and Port Dundas was closed in 2010.

Spiced, prickly, slightly drying but a small component of mouth-coating sweetness too, a little paradoxical and of medium length

Possibly not, this is one of the finest Scottish Grain Whiskies I have tasted but I am not sure I would want a whole bottle of this. Complex and interesting but a little spicy and thin and lacking in body and character that single malts bring. A multitude of vanilla, banana and coconut cream and even some almost direct from the cask Bourbon flavours in this reveal the true nature of its age – just leaves you with little to really chew on and get your teeth into… Still, to taste a piece of history was priceless and I would recommend anyone to try it, a beautiful addition to the Clan Denny range for sure.