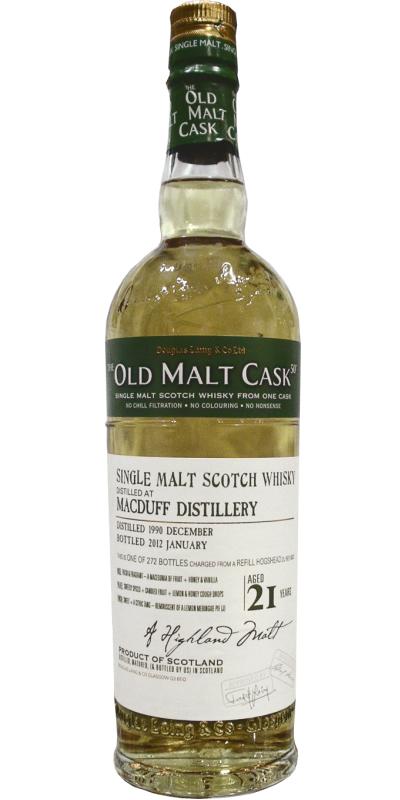 Distilled at Macduff in 1990, this 21 year old single cask highland whisky was bottled by Douglas Laing as part of their Old Malt Cask series in 2011.

Finish: Long and spiced with notes of lemon zest and rhubarb.

Sample #4 from our Horizon21 horizontal tasting session of 21 year old single malts hails from the Macduff distillery. This relatively modern distillery was established in 1962 near Banff in the Speyside region and is officially bottled under the name of Glen Deveron whisky. Distilled in December 1990 and bottled at 21 years old in January of 2012 by Douglas Laing as part of their Old Malt Cask range.

Initially oily and a little sour this develops a cinnamon spice and then a sweet vanilla flavour before the strong soor ploom (or sour plum sweets) sourness kicks in a lot stronger than the nose would suggest, pear tart, honey and oaky wood are revealed become slightly drying by the end

Interesting and complex, with distinctive sour notes, on the face of it this wouldn’t fit my preferred flavour profile but the overall effect is quite pleasurable and an interesting deviation from the usual mellow, sweet and fruity generic Speyside  flavour profile. Definitely the whisky for lovers of soor plooms and pear drops – this one is a veritable sweetie shop