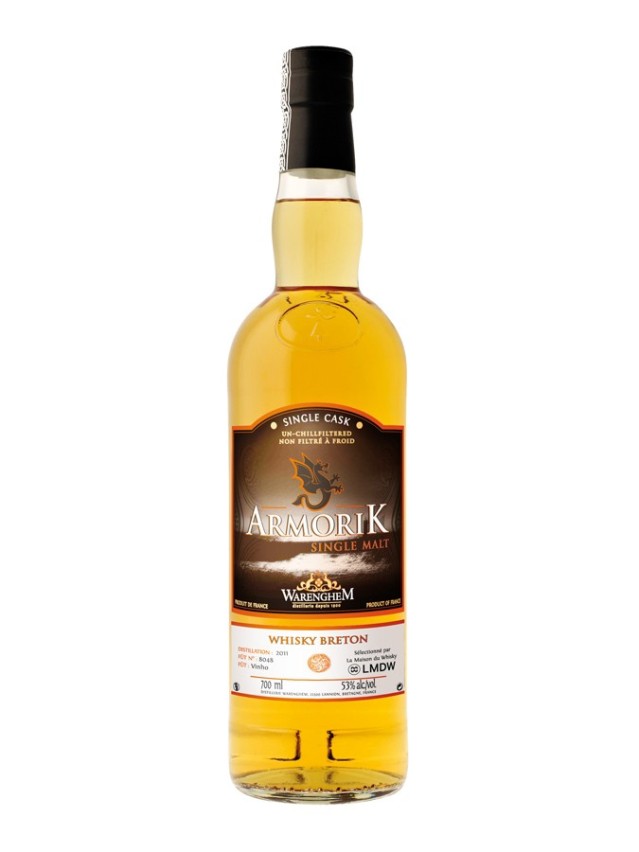 This whisky has no hesitation asserting its identity by setting off on a journey through its native land of Brittany. Its aromatic and gustatory palette is best described with adjectives such as complex, powerful, tumultuous and uncompromising. It is also generous, putting its heart and soul into taking us on an adven – ture to explore every facet of its personality, leaving no stone unturned.

Thanks to Franck at La Cave du Cobalt for scoring a bottle of this single cask Armorik bottled for LMDW at a discounted price of €61.75. Having tried their standard offerings I was always keen on finding more – which is not so easy this side of the English Channel. This expression was distilled in 2011 and matured until 2015 in a Vinho Barrique before bottling for LMDW.

Similar to the nose, mid-sweet and moves around a bit on the palate, peach fruit but also savoury – a little peach skin too, mixed berries, strawberry, blueberry, orange, much spicier than the nose, pepper, cinnamon and ginger all feature with sweet a mint-like flavour that had me thinking of peppermints but settling on mint imperial sweeties, some cereal barley, vanilla and tannic oak also feature.

This was full of unusual fruit flavours and possessed of such a sweet & minty character – unusually this was not the tell-tale menthol of underactive cask or over-aged whisky but more a very herbal and sweet mint that was pleasantly refreshing against the fruity backdrop. Tannic oak of the wine barrique also kept in check. Quite mobile in aroma and flavour but all very pleasing.