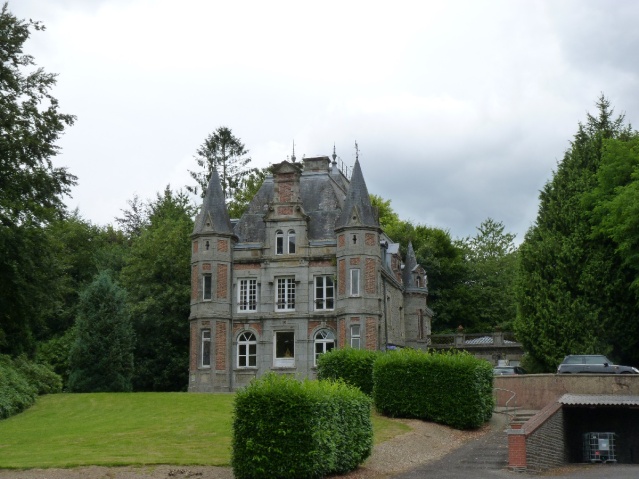 The Domaine du Coquerel lies a short distance from St Hilaire du Harcouët and again is only a few km from where we holiday in France. Unusually for the region they adhere to the traditional production methods of pure apple Calvados unlike many of the other nearby producers in the Domfrontais region who use a high proportion of pears. Compared to the nearby farm distilleries like Lemorton, Coquerel is a much more industrial setup and have benefited greatly from their recent ownership (1990-1996) by Diageo, as part of the purchase of the German brandy producer Asbach to whom Coquerel belonged at the time. A significant modernisation and investment allowed Coquerel to develop into one of the biggest and most efficient Calvados producers in the region.

As soon as we arrived and met up with our host, and son of the current owner, Pierre Martin Neuhaus the reasoning behind their production methods became obvious. Although the Domaine is planted with numerous apple trees the majority of their raw material is purchased from growers in the surrounding area. 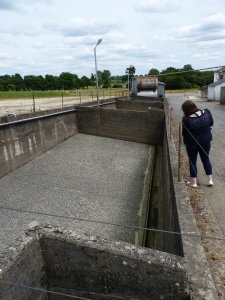 Due to the scale of production, tonnes of apples are delivered by truck and deposited into large apple washing bins the size of swimming pools! Pierre explained that while they don’t source pears they estimate up to 3% may be included. However pears bruise easily, especially when deposited into the concrete wash bins, hence their preference not to use them. 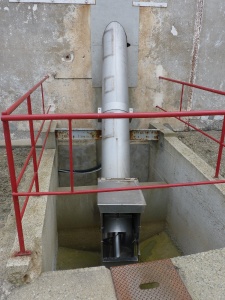 The apples are washed and gravitationally floated to an elevator which takes them to a grating machine where they are turned into pulp. The pulp is conveyed to a press, spread out between two perforated sheets of metal and driven through two high-pressure rollers. The apple-juice thus produced is called the must. 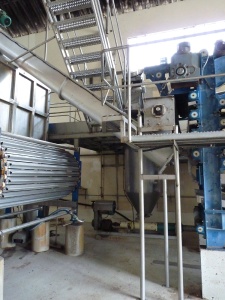 After maceration they are subject to juice extraction via a hydraulic press (removing 80-90% of the juice and sugars). The remaining apple must is then placed onto a diffusion band which extracts any remaining sugar (up to 99%) in a process that can take over 4 hours. 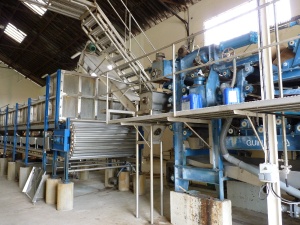 The juice is then fermented in stainless steel vats to produce a cider. From September to November the cider factory brews every year around 6,000 tons of apples. The apple juice is left to ferment naturally over several months as the sugar gradually turns into alcohol. 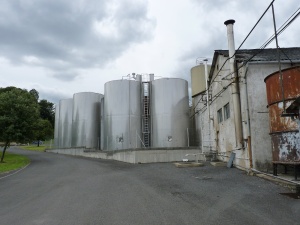 The cider is subject to column still distillation. From January to May their alambics distil the equivalent of c. 900,000 bottles. It is only after this fermentation process that this cider can be distilled to produce “eau de vie de cidre” (apple brandy). The distillation method used at the Maison Coquerel is called “first stage “ distillation. 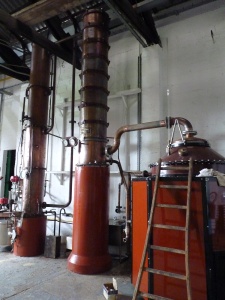 This is what makes it possible to extract the alcohol contained in the cider. By raising its temperature to boiling point in a copper still, the alcoholic vapours of the cider rise into a concentration column where they are cooled down. 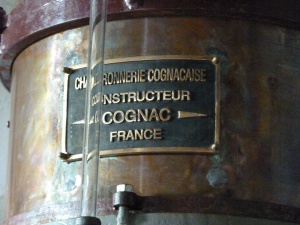 The beginning (heads) and end (tails) parts of the distillation are separated and only the 70°-proof middle part is retained. It takes 6 kg of apples to obtain five liters of cider which in turn produce an average 70 centiliters and 40°-proof bottle of Calvados. 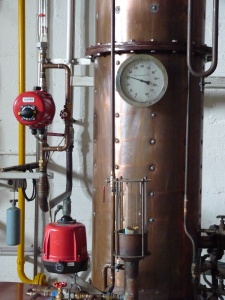 The spirit is filled into French oak casks and then aged in the warehouses on site. Pierre took us around the still house past the two column stills built in Cognac and several Tonneau (tuns or spirit receivers where the spirit or eau-de-vie rests) through several of their  warehouses and explained how the stock was matured and rotated between warehouses dependent upon its intended usage. 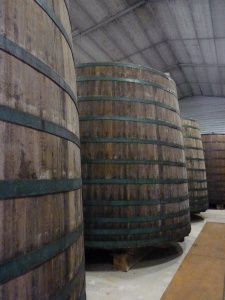 All year long, you will have the chance to visit our cellars where there are more than 2,500 small oak barrels and 20 large oak barrels. Calvados matures in barrels made from dry oak in which the contact with the wood provides all the necessary elements for its successful completion. Our Calvados is housed in our storage cellars where it starts maturing in 2,500 small oak barrels and about thirty hogsheads or large casks, all made of white oak from the Limousin area which will bring out the best qualities in the brandy. In the hallowed silence of our storage cellars, Calvados shapes and develops its rich personality. Every year, we lose the equivalent of 60,000 bottles of Calvados to evaporation. This is called “la part des anges” [the angels’ share]. 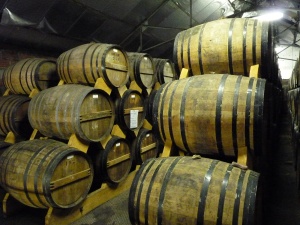 Time plays its part… so does our cellar-master in charge of the delicate evolution of the different varieties of Calvados. Like a true alchemist, it is he who oversees the blending of Calvados from different areas or crops, always to achieve that perfect balance and flavour which is the trademark of Calvados Coquerel. After patiently waiting for our eau de vie to mature, our cellar master starts creating the blends of our Maison. The blending consists in the selection and careful pairing of each Calvados of our cellars in order to ensure that each bottle will bear our signature. 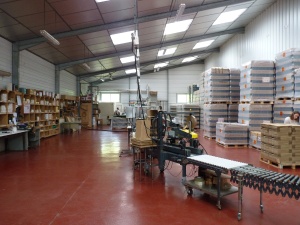 All year long we products are bottled in their own bottling hall in the Domaine and shipped worldwide. 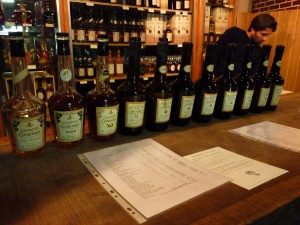 Finally a visit to their tasting bar and shop was in order to stock up before we left. Coquerel produce Fine (2+ year old), Vieux (3+ year old), VSOP (4+ year old) and XO (6-10 years old) as well as their Marquis de la Pomme aged (15, 20 or 30 year old) and Millésimé or vintages; reviews coming soon.

Settlement in the Manoir du Coquerel in the heart of the AOC region and at only a few kilometers from le Mont-Saint-Michel.

The German group Asbach & Cie, the spirits leader in the RFA acquired the Calvados Gilbert and Sir François Martin is appointed as CEO.

The company switched to fly under the british flag when Diageo purchased Asbach & Cie and Jean-Fançois Martin is appointed CEO in replacement of his father.

Calvados Coquerel is exported to over 20 countries worldwide. 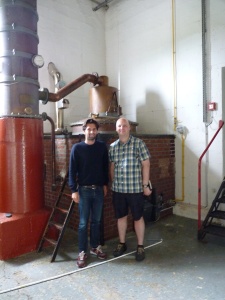 Many thanks to our gracious host Pierre Martin Neuhaus for an informative and enlightening tour. 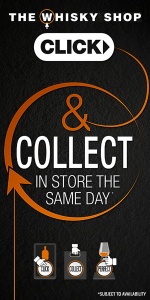