Shortly after the unveiling of Jameson’s sixth limited edition bottle ahead of its annual St. Patrick’s Day festivities, Jameson chanced their arm and extended an invitation for me to join them in Dublin to celebrate St. Patrick’s Day with the artist amongst a whole host of other events organised over an action-packed 3 days. 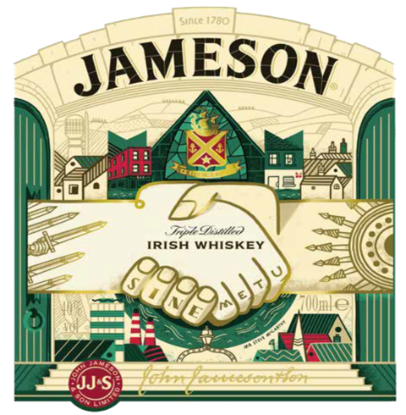 The most recent in a series of collaborations with Irish artists, this year’s bottle has been designed by Dublin-based designer and illustrator, Steve McCarthy. 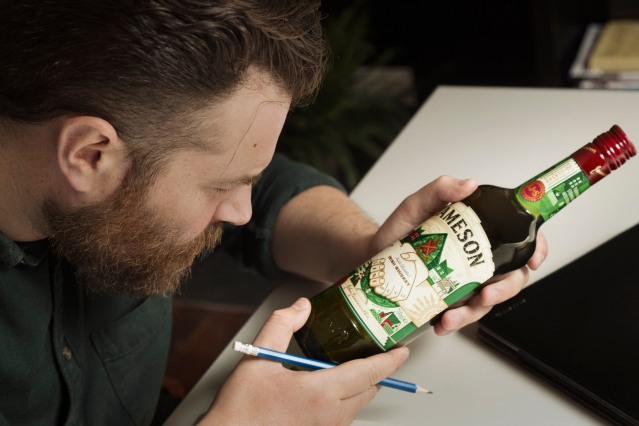 McCarthy’s creative starting point came from the Jameson family motto Sine Metu – or without fear – which has been at the heart of the company since it was founded in 1780 and lives on today. He also took inspiration from a commonly used Irish saying that goes hand in hand with Sine Metu, ‘to chance your arm’.

Legend has it that in 1492, ‘Black James’ Butler and his men found themselves barricaded behind the door to St. Patrick’s Cathedral in Dublin. On the other side was Gearóid Fitzgerald who, tired of the constant fighting between the clans, decided it was time to make peace. Fitzgerald ordered his men to cut a hole in the door before extending his hand through the gap as a token of friendship. Rather than cut his arm off with a sword, Butler shook it and the long standing feud came to an end, giving Dublin one of its most famous sayings: to chance your arm.

ver 500 years later, Dublin is still a place where social barriers break easily and friendships come about in the most unexpected of ways and this has been brought to life on the label through two outstretched hands exchanging a handshake, framed by the St. Patrick’s Cathedral door of Reconciliation. The Sine Metu motto has been tattooed on to the knuckles of each hand as a reminder that when we fear a bit less, we live a bit more.

McCarthy has included some of the Irish capital’s most recognisable monuments in his bold and colourful design, such as the Ha’penny Bridge and Smithfield tower, and has also peppered the label with additional details that are reflective of his own knowledge of the city and sense of humour.

I wanted it to feel like there was a deeper meaning to what you see. For me, the Jameson motto is very emotive and I hope that with my design I am able to speak to others around the world who have also been inspired by Sine Metu, or those who might still with this release, to fear a bit less to live a bit more.

The release of the sixth limited edition bottle kicks off Jameson’s global St. Patrick’s Day celebrations for 2017 and will be available in markets including the USA, Ireland and Russia from February 2017, with a recommended retail price of €30 (or local equivalent).

Our limited edition Jameson bottle for 2017 keeps the spirit of John Jameson alive and celebrates a very Irish saying that dates back to the 15th century but is as relevant as ever today. As Jameson found when he established the Bow Street distillery in 1780, fearing less can help you reap rewards you never thought possible and we still proudly live by this ethos.

Steve’s design perfectly balances the rich heritage of Dublin with the modern design and Irish wit of Jameson, and we hope that Irish whiskey fans will be inspired by the bottle in their own St. Patrick’s Day celebrations. 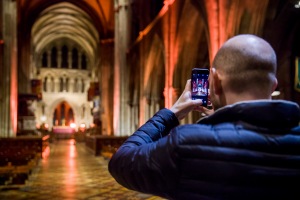 y St. Patrick’s Day Journey began on Wednesday 15th March, flying into Dublin to visit the city for the very first time. From the minute I landed I was whisked from airport to hotel and again from hotel to St. Patrick’s Cathedral in the centre of Dublin.

Lit up in glorious green, it was like something from a rather odd dream walking in past the clergyman to the 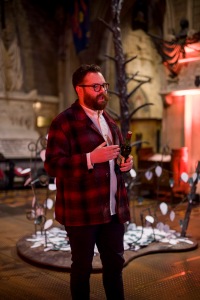 waiting tray of drinks and being offered either a Jameson Caskmates Cocktail ‘Balsa Wood’ or Jameson Whiskey Sour. I opted for the Caskmates cocktail as my fellow whisky blogger in our party Nicola from the Whisky Boys opted for the Sour – with a view to a sample and swap. I think I preferred my 1st choice and even managed another one after dinner!

After a short while to bask in the atmosphere of the Cathedral we were introduced to Steve McCarthy who told us the story behind his bottle label, all the while set to the backdrop of the very door complete with hole through which Gearóid Fitzgerald chanced his arm around 525 years ago! The long tradition of Irish sayings, their meanings and (usually) the numerous stories claiming to be their origin and the meaning behind them was what Steve was trying to capture in his label and story behind it, and I feel he has done a grand job at depicting this on his St. Patrick’s Day Jameson special edition label. 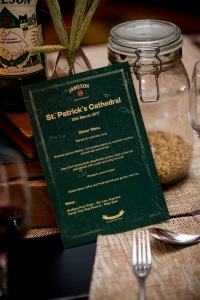 Following this introduction we were treated to a sumptuous meal from Ted Burner of Wildside Catering made from some of the finest home-grown ingredients, starting with a distinctly green spinach and rosemary soup with delicious wild garlic flowers, smoked salmon rilletes and monkfish ceviche followed by a delicious spring lamb with accompaniments. 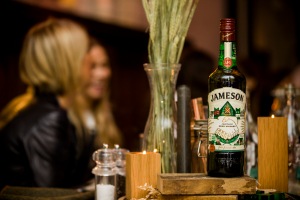 All in the vaulted ceilings of the Cathedral – very Harry Potter! What better way to get into the spirit of St. Patrick’s Day, if this wasn’t enough we were whisked to the Liqour Rooms next to the River Liffey to continue celebrating with more Jameson cocktails and a chance to meet and great with many of our hosts. Having met Jameson’s Head Blender Billy Leighton at one or two whisky festivals closer to home, it was great to get a chance to share a cocktail with him as part of the nights festivities – Dr McGillivary’s Potent Potable no less, made from Jameson Black Barrel, ginger, apricot, spiced porter syrup, and chocolate bitters. 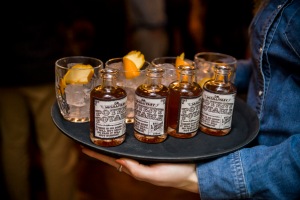 During the evening we had a brief chance to familiarise ourselves with the schedule for the next couple of days activities and they were action-packed, including an Irish Coffee making masterclass, a blending session with Billy, some fine food and (of course!) drinks, live music and a visit to the newly refurbished Jameson Distillery Bow St in the heart of Dublin! I’ll be writing much more about each of these over the next series of blog posts.

It was time for us to embark upon our festivities Sine Metu as the Jameson family motto encourages; ‘Without Fear’