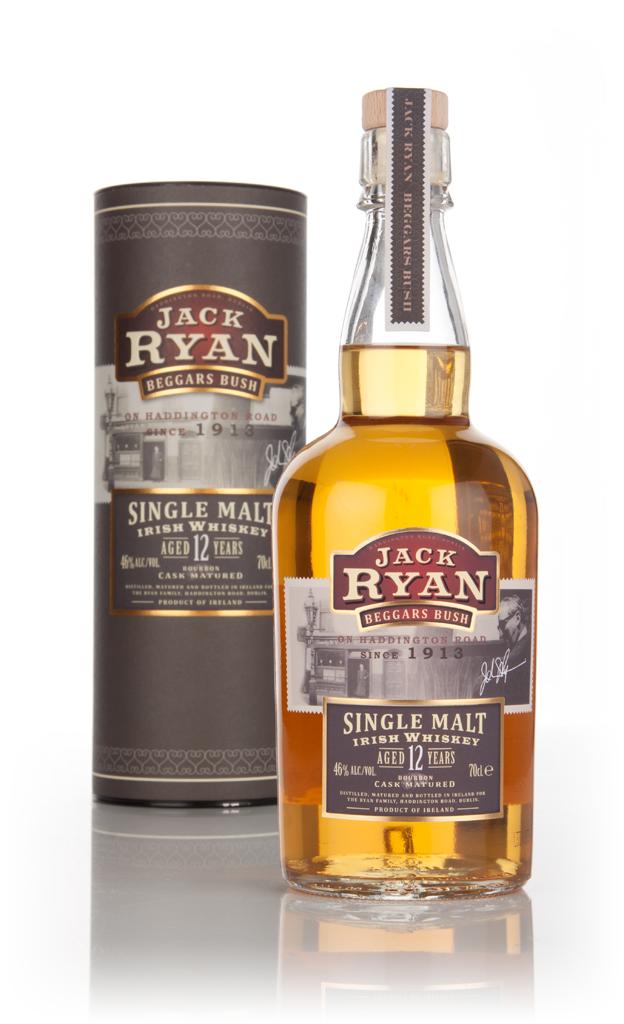 Our very own Limited Release Irish Whiskey,
Celebrating 100 Years of the Ryan’s at the Beggars Bush

The Ryan family have long associations with Irish Whiskey going back to a time when they bottled their own Ryan’s Malt which they produced in association with The Dublin Whiskey Distillery until the famous distillery closed its doors in 1946. To celebrate the Ryan’s Beggars Bush 100th Year Anniversary in 2013, the family identified an opportunity to revive their Jack Ryan’s Malt.

Jack Ryan’s Malt offers a strong and authentic Irish Whiskey proposition and brand story which will provide a new dimension to support the significant growth and consumer attraction to these exciting whiskey categories while being true to Irish Whiskey values and authenticity develop added value and innovation by introducing/marrying elements of the great American Bourbon Whiskies in terms of liquid finishing and packaging development.

The bottle label depicts an image from 1913 of the exterior of the landmark public house and original lamp post that still stands today at 115 Haddington Road. It also includes an image of Jack Ryan and his handwritten signature. The label gives reference to Jack Ryan’s character, public house, and Single Malt.

Jack Ryan ‘Beggars Bush’ Single Malt Irish Whiskey 46% has been aged for 12 years, with no chill filtration, allowing the true flavours of the whiskey to be retained.

The whiskey has been matured in ex-bourbon barrels hand-picked by the family themselves, to deliver a unique taste. The golden amber glow and nose of sweet, oaky vanilla, sets you up for a delicious mouthful of silky, honey sweetness with a long, warm-hearted, lingering, spicy finish.

A limited edition Cask Strength Single Malt with an abv of 56.5% is also available in limited supply. 250 bottles of the limited edition individually signed and numbered by Eunan Ryan.

Jack Ryans was awarded the coveted title of ‘Best Irish single malt whiskey’ in the 12 years and younger category after beating off stiff competition at the prestigious Irish Whiskey awards ceremony which were held on the 23rd October 2014.

After launching at the end of 2013, this has come as a great achievement for a small independent whiskey brand and a fitting tribute to the long tradition of the Ryan family in the licensed trade.

The Voting panel was made up of members from both and Irish and international perspective including the Celtic Whiskey Club and the Irish Whiskey Society. The results where determined by a series of blind tasting carried out with each entry. Jack Ryans scored a staggering 10 votes ahead of its closest scoring competitor.

Sampled during the #JackRyanWhiskey tweet tasting hosted by Steve @TheWhiskyWire

Apple pie, lemon tart, gooseberry and elderflower fool, ginger and white chocolate cheesecake, vanilla and cream pastries, a citric crispness and some spiced woody oak with kicks of cinnamon and white pepper and a touch of creamed coconut.

Another example of fine single malt whisky that is the equal of Scotch, only this time distilled in Ireland at the Cooley Distillery!