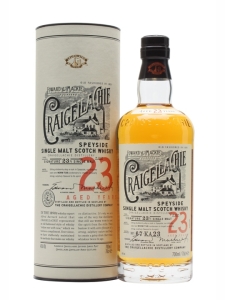 Craigellachie distillery sits nestled in the heart of Speyside atop a rock overlooking the confluence of two great rivers, the Fiddich and the Spey. The distillery was built by Peter Mackie and Alexander Edward in 1891 and still uses traditional worm tubs giving the resulting malt a distinctive meaty, sulphury character.

A malty tang. Oil. Grit and grist. Summons the mill house of old. Then cinnamon and a menthol dunt. Pigheaded, big flavoured. Sweet-and-sulphur with each mouthful. A muckle, meaty dram.

Long, balanced sweet fruits and spices, much less ‘meaty’ than the 17 Years Old with the sulphurous character much more in the background, a mouth-coating vanilla cream persists

A beautiful expression, a powerful zestiness is present here which carries the body. The sulphur is still present but most of the coppery metallic nature of the younger expressions is masked by masses of vanilla and old oak wood influence. This was a pleasure to sample but unlikely I would purchase this expression due to the high RRP. Especially as the 17 Years Old offers such excellent intensity of flavour for a much more affordable price.