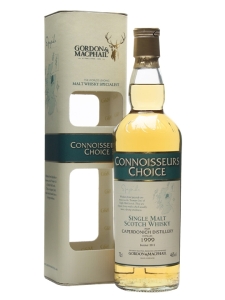 A sumptuous Speyside single malt which slumbered in Sherry butts from 1999 to 2013. This Caperdonich makes for a fine addition to Gordon & MacPhail’s Connoisseurs Choice.

TASTE without water: Chili spice with a touch of aniseed and a hint of ripe banana, with a creamy milk chocolate finish.

AROMA with water: Fresh with herbal notes, hints of thyme and lemon zest. Followed by subtle hints of aniseed and pear.

Dram 3 from the Jolly Jaunt to Annandale distillery was yet another closed distillery! This time a Caperdonich, distilled in 1999, matured in a sherry butt, and bottled in 2013 (for 13 or 14 years old?).

Medium/long and slightly drying and tannic

Sadly not as pleasing as I had hoped, I have had several very good expressions from Caperdonich and grown quite fond of this silent distillery. The colour suggests not much sherry influence was left in this butt, with only a mild chocolatey and tannic offering in the finish to convince me.