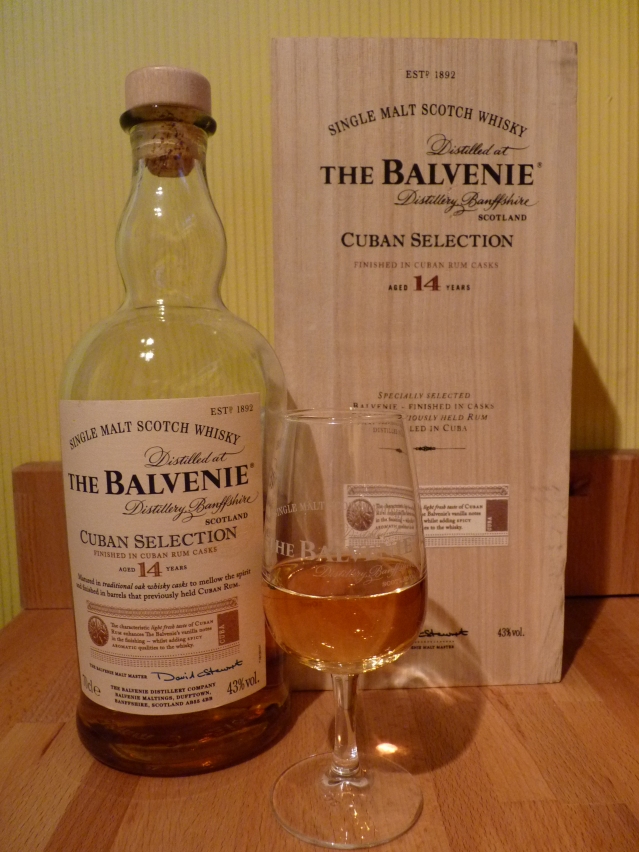 Purchase in E. Leclerc supermarket in France, spotted this as an EU release (not available in the UK) and damn cheap too, there may have been some promotional discount for ~5€ off purchase price (instant discount) helping me with my decision. Not long after we brought this back to the UK, The Balvenie launched their Carribean Cask expression as part of their core standard range. Previously a Golden Cask version had been available as a limited release (perhaps via travel retail). Anyway the premise of each release is the same, Balvenie that has been part matured in casks that once held (golden?) rum. Plus it came in its own funky little wooden crate!

Yes! I seem a little at odds with the fact that I scored this at 86 yet the Carribean cask we tried only mustered 71 – perhaps a lot is to be said about locale/environment and others in the tasting lineup to affect our relative experiences. For me this is delicious and has exotic ripe banana and rum stamped all over it, the Carribean cask I felt was a little disjointed (like whisky and rum mixed). I was a little disappointed to learn that the ‘Cuban rum casks’ are actually ex-bourbon casks that have imported rum put into them for a while to season them (in the exotic locale of Speyside) then the rum is tossed (yup – that’s right, down the drain it goes) for the “rum” barrel to then be used to finish the whisky. I guess in all of this process there is a lot of room for variation; the rum, the casks, the time for rum-seasoning and finally the time for whisky finishing with the only controlling process coming from the Balvenie Malt Master David Stewart himself overseeing this process. The Cuban expression however deserves it’s slightly exclusive status as it was discovered to be un-saleable in the US due to their foreign policy/embargo (el bloqueo) on Cuban products. Having drawn attention to this, Balvenie then had to go to great lengths subsequently to prove non of their rum imported to Speyside had come from Cuba when making the Golden or Carribean Cask expressions. C’est la vie…