This weeks tasting was hosted by Kilchoman Distillery and their sales and marketing manager James Wills. I presume the Committee were getting us into the Islay spirit with the impending WoLS Islay Trip just days away.

Before the whisky tasting started in earnest however, long-time friend of WoLS – Annabel Meikle (a.k.a. The Whisky Belle) gave us a short introduction to the Uisge Source range of spring water (for more information visit their website here). Annabel took us through the Usige Source range and also helped with suggestions for their use during the tasting. The Uisge Source currently consists of 3 bottlings from specifically sourced wells in the Islay, Highland and Speyside regions that typify the water qualities of these regions. The idea behind these is the concept of Terroir, so Islay whisky should be diluted with Islay water of similar chemical make-up as that used for the production and distillation of the whisky, to retain optimum character. 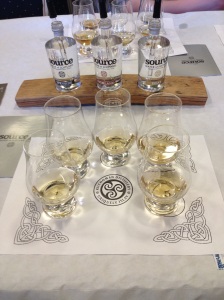 Established in 2005, Kilchoman (pronounced Kilhoman) is one of the smallest distilleries in Scotland.  Based on a farm on the rugged west coast of Islay, Kilchoman is the first distillery to be built on the Island for 125 years.  Kilchoman gives everyone the chance to see what is best about the grass-roots traditions of malt distilling.

As well as being one of only a handful of distilleries still practicing floor malting, they also grow their own barley at the distillery, completing all parts of the production process at the distillery – from barley to bottling.

While James regaled us with the trials and tribulations of setting up the first new distillery on Islay for over 100 years, he explained how from the outset they have sought to produce a spirit that is sweet, fruity and well balanced. As such it requires little cask maturation for it to be palatable, or even highly drinkable, with a minimal amount of maturation. To be ‘Scotch Whisky’ it is required to spend 3 years in a cask. Kilchoman even at this stage has taken on a reasonable amount of cask character and is rounding out into a very drinkable whisky and is therefore very marketable despite its youth. To highlight this character James passed around some ‘casking strength’ New Make spirit for us to try.

James also explained how they only produce around 30% of their barley required on the farm, their own malt is peated to around 20ppm (parts per million) phenol using their own peat fired kiln. The remaining barley quota is filled from the Port Ellen Maltings on Islay and is peated to around 50 ppm, similar to some of the other bigger distilleries on Islay. As Kilchoman is so small in comparison, they are unable to specify their own requirements and so use what is made available to them. The peated malted barley has long been suspected of yielding lower alcohol production per tonne, making Islay single malts relatively more expensive to produce than say Speyside malts. Typically at Kilchoman they hope to produce around 310 litres of alcohol per tonne of Port Ellen malted barley, however this figure drops drastically to around 160 litres per tonne of their own peated ‘Islay’ barley. The New Make was produced from the peatier ‘Port Ellen’ malt, as are all the Kilchoman expressions we go on to try apart from the first:

Produced from 100% Islay Barly, grown, malted and peated, distilled and bottled at Kilchoman Distillery. This release has had a longer maturation compared to the 2nd Edition and is a vatting of four and five year old fresh bourbon barrels. Only 10,000 bottles of this limited edition will be available worldwide. With a delicate and floral nose of soft fruits and pear drops, 100% Islay goes on with peat smoke in the mouth, complimented by a long, sweet and lingering finish that blends with the softer tones of peat smoke. Released Monday 13th July 2003 retailing at £59.95 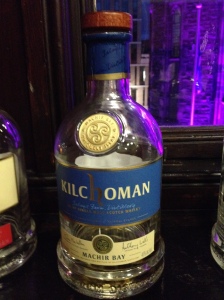 James explained how this is currently considered the staple expression of the Kilchoman range, equivalent to other distilleries standard 10 year old expressions.  The 2013 Machir Bay was constructed using ‘Port Ellen’ peated spirit matured in ex Buffalo Trace Bourbon casks for 4 to 5 years before an 8 week finishing in Oloroso Sherry conditioned casks. The result is the Kilchoman signature taste of fruity, sweet & peat.

Palate: Sweet and fruity, chocolate, malty cereal and a little peppery spice, with water a little of the new make qualities come out more

Read more about the Kilchoman Loch Gorm 2014 Release here. This 2nd edition Loch Gorm is 100% sherry-cask matured like the 1st edition, however this time it was matured in refill butts and hogsheads, imparting a lot lighter sherry influence – balanced by the slightly more mature nature of the Kilchoman matured spirit. 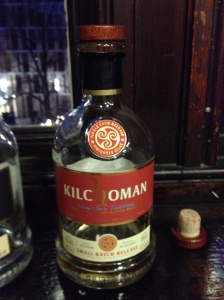 This small batch release from Kilchoman is essentially a cask strength version of the Machir Bay expression. Bottled at 58.2% ABV it has been matured in 3 1st fill Buffalo Trace bourbon casks before an 8 week finish in Oloroso Sherry casks. James explained how in the beginning they had experimented at Kilchoman with a variety of bourbon casks, but ex Buffalo Trace casks gave them the required maturation with a high uniformity. Kilchoman now buy and ship BT casks whole from the US for use in their maturation programme. The result is spectacular and would have been awarded best whisky of the tasting if James hadn’t pulled out the final sample…

Palate: A fruity jam explosion, sweet red berry fruits with a hint of cereal malt and a complimentary peaty prickle

The final dram of the evening was a 3 year old Kilchoman that had been entirely matured in ex port pipes. Filled as Cask #55 in 2011, this port-cask maturation has imbued the Kilchoman spirit with masses of colour and flavour direct from the port. Beautifully sweet and a little peaty and infused with the exuberance of youth, this was a truly superb dram. A little further investigation revealed that this port-cask matured batch will be vatted sometime in autumn 2014 at around 3 and 1/2 years old and is expected to retail at around £60-£80 a bottle, this is most definitely one for both the collectors and drinkers (so buy 2, but not until I get 2 first!) 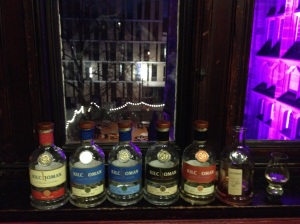 The final line-up, leaving us all very happy and massively grateful to Annabel Meikle, Uisge Source, James Wills and the WoLS committee for putting on a spectacular tasting from Kilchoman Distillery