Richard kicked off the evening with a refined and fruity blended little number (12) from Japan. Hibiki is a blend of malt whiskies from Suntory’s Japanese distilleries Yamazaki and Hakushu plus a little of their grain whisky from Chita. The whisky has partially been matured in Japanese plum liquer barrels. Suntory describe this as ‘Blossoming. Exuberant. A dazzling, echoing roundness’. Like Richard this whisky was elegant, refined and a little unusual! (being from Japan, the whisky that is – not Richard)

Sam (Sanna) entertained us with a highly drinkable Balvenie expression with an unusual rum finish, an expression I have tried on numerous occasions before. ‘Caribbean Cask has been matured in traditional oak whisky casks for 14 years, and then ‘finished’ in casks that previously held Caribbean rum. To create the ideal finish Malt Master David Stewart, filled American oak casks with his own blend of select West Indian rums. When he judged the casks to be ready, the rum was replaced with the 14 year old spirit and the wood was put to work adding the final touches. The result is an exceptional single malt whisky with the traditional smooth, honeyed character of The Balvenie, married with notes of toffee and a hint of fruit, with a warm, lingering finish.’ Like Sam this one leaves you with the soft lingering feeling that someone has been well soaked in rum, or whisky…

Taste: Rounded with vanilla and sweet oak notes, with a fruity character that develops with time 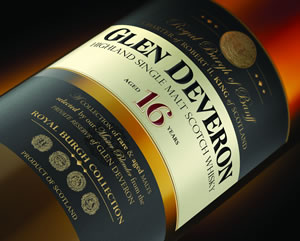 Christy regaled us with her near violent shopping experience with the wonderful folks at Edinburgh Airport’s World Of Whiskies in her attempts to secure us a travel retail exclusive. From the Macduff distillery (hence bottled as Glen Deveron) this is a relatively new 16 year old bottling, this subtle expression with a golden amber colour has notes of fine toasted cereals and apple, making this a full, fruity malt with a smooth and mellow finish. Though I prefer WOW’s tasting notes: Fresh fruit, slightly tart – green apple, grapefruit, kiwi – with a trace of dusty dried herbs. The taste is lightly sweet, the sour with a thread of pear in the finish. A refreshing aperitif.  I personally thought this was very enjoyable with lots of sweet toffee and stewed apple flavours. Despite the temptation, and purely to prevent me getting my head kicked-in – I will cast no aspersions by likening Christy and the tasting note ‘slightly tart’. Being a 1L travel retail exclusive this bottle was very tall…

For Josef’s choice we were treated to the no-age-statement (NAS) Caol Ila Moch. Josef wanted to bring us something from the Caol Ila distillery on Islay and their 2011 released Moch, Moch being Gaelic for Dawn, fit the bill exactly. Initially only available to the Friends of the Classic Malts, Moch was the first single malt from the distillery to be selected entirely on the basis of its taste, rather than age, cask wood, strength or finish. The nose is creamy and lemony, before a silky-smooth medium-bodied palate that still packs a peaty punch. The finish is dry, sooty and very more-ish. Moch is a wonderful newcomer from Caol Ila and is a must-try for fans of this outstanding distillery. Lighter in style than the standard 12yo expression, Moch is a fantastic easy-drinking dram. On a similar note lets hope Josef doesn’t pack a peaty punch (what a great alliteration)

And finally wee Sam delivered to us the mightiest of the bunch in this bottling of The Ileach Cask strength. Much to some committee member’s chagrin this ‘Got a whopping big score in Jim Murray’s 2008 bible’. Massively peaty suggesting a south coast or Kildalton malt… ok its from Lagavulin, everything I tasted in this dram screamed as such at me before Sam confirmed my suspicions. Probably bottled young at around 8 years old this is still full of the oily peat and malt that Lagavulin is so popular for. For me the best dram of the evening but mostly based on my tastes as they were all very drinkable and enjoyable in their own way. The Caol Ila and Ileach seem to be the best received by most of my co-conspirators on the evening with perhaps the strength, in both complexity and alcohol, tipping the Ileach into the lead.