The Balvenie returned to Edinburgh in September with their Whisky Fete, held in St. Andrew Square amongst their geodesic whisky-stave domes. To continue their themes from the Master of Craft tours there were live coopering displays with The Balvenie’s Head Cooper Ian MacDonald revealing the secrets to the art of constructing whisky casks using the traditional tools and methods. 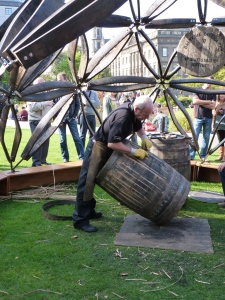 For the visitors their was also the opportunities to savour a little of The Balvenie, both the 12 Years Old Doublewood which was extracted from the barrel using a dipping dog, as well as various tasting classes, including those run by one of The Whiskyphiles blog inspirations, Miss Whisky [http://misswhisky.com/]. As well as Whisky and Chocolate pairings from Thinking Chocolate [http://anandachocolates.vpweb.co.uk/].

For the members of The Balvenie’s Warehouse 24 [online whisky enthusiasts], there were a limited number of exclusive tasting events. Despite our best attempts to mess up the online booking, both my Fiancé and myself managed to wrangle our way into the same tasting event. As our tasting was to be held late on the Saturday afternoon we popped down early to check out the Fete, watch a little coopering and enjoy a dipped [or dogged?, or perhaps even dog-dipped?] Doublewood. 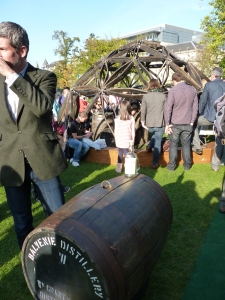 For our tasting event we were placed in the capable hands of the Spirit of the Spey himself Dave Craig [http://www.spiritofthespey.co.uk/river-spey-history-dave-craig/] who generally earns his living guiding canoe tours down the River Spey and taking in some of the choice distilleries along the way, with support from the The Balvenie UK Brand Ambassador Dr Andrew Forrester, on hand to fill in any sciency bits. While a few of the whiskies we tasted were repetitions of those tasted at the Master of Craft tour, some were not so we attempted to make a few tasting notes as I failed utterly to do so last time!

The Balvenie Single Barrel First Fill has been aged in a first fill, ex-bourbon cask for at least 12 years. Almost all Scotch Whisky is matured in casks previously used by Bourbon distillers. When brought to Scotland and used for the very first time they are known as ‘First Fill’. Our Malt Master samples the aged whisky, cask by cask and selects only those characterised by sweetness and subtle vanilla oak to be bottled as The Balvenie Single Barrel First Fill. A series of “limited editions” – Each bottle is one of no more than 300 drawn from a single cask and each is hand-numbered and carries the number of the cask in which it matured. Dr Andrew Forrester, UK Brand Ambassador says: “As no two casks will ever produce the same whisky and there are no more than 300 bottles from any single cask, every batch of The Balvenie Single Barrel First Fill will have a unique identity. Due to the experience David Stewart has from over 50 years at The Balvenie however, we can expect a consistent character to this dram and boy, it is a good one”.

Bounty of sweet oak and spice.

Rich and complex with deep vanilla oakiness. Honey notes will be overlaid with sweet fruits and subtle spices.

This light gold dram was full of sweet vanilla and marzipan, plenty of The Balvenie core distillate flavours in here too, this was recommended as a match to mussels or scallops. To understand a little more about this whisky some of The Balvenie new make spirit was passed around, this clear 69.7% ABV liquid was redolant with aromas of yeast and barley, flour and baking reminding us of the distillery mashtun and washback scents.

Previously covered in the Master of Craft tour. Andrew explained how the Carribean Rum is imported to Dufftown in Speyside and interred into the prepared casks for a period of maturation of the cask, before the Rum is switched out for the whisky that has previously spent a minimum of 14 years in a bourbon cask. The time in the rum-conditioned cask is variable dependent upon how quickly the whisky achieves the desired finishing but is minimally 4 to 6 months.

This golden dram carries aromas of brown sugar and pineapple, with a fruity taste with strong ripe banana flavours on top of the core whisky.

Previously covered in the Master of Craft tour. 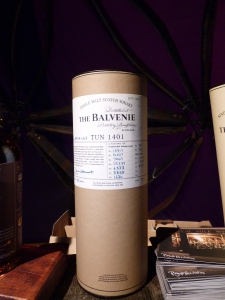 To craft The Balvenie Tun 1401, Malt Master David Stewart transfers specially selected casks from across the ages to a marrying tun cared for by the distillery’s in-house team of coopers. The contents of these rare casks spent three months ‘getting to know’ one another in marrying tun number 1401, from which this single malt takes its name. The most recent release, Batch 8, is characterised by citrus fruits, vanilla and honey, has recently been bottled at an abv of 50.2% and will be available from June 2013 in Canada, Australia, the UK, France and a number of other European countries.

Floral and fruity on the nose, with hints of lightly toasted spices, brown sugar and ripe vanilla balancing the gentle oak tannins. The rich, fruity taste has a warming spiciness of cinnamon and ginger, underpinned by maple syrup, sweet vanilla and tangy citrus notes. Citrus, vanilla and a gentle oakiness are evident on the finish.

Simply supreme! Sadly intended to retail at £150/bottle though sold out from The Balvenie almost immediately, spotted at anywhere from £200 to £400 plus in various Edinburgh whisky shops already…makes this way out of my price range to buy a bottle.

Oranges and cinnamon, acetone [nail polish remover], pine needles, green herbs, dunnage [blocks of old used wood, packaging material], leather, reminiscent of oak casks in the warehouse, as you dip your nose deeper into the glass each of these aromas build and shift across your nose.

This is a very oily and syrupy dram that fills the mouth with a rich fruit cake flavour, some very herbaceous flavours in this from some of the older cask maturations, suede leather, oak wood and more deep fruits like rum & raisins. 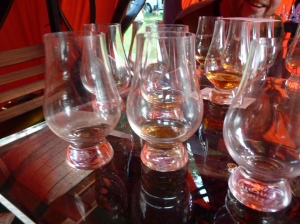 Empty glasses – a sure sign of a good tasting session.

Finally we would like to thank The Balvenie, Dave, Andrew and family for their hospitality, sharing their knowledge, experience and love of whisky with us and making this such a great day. Cheers.