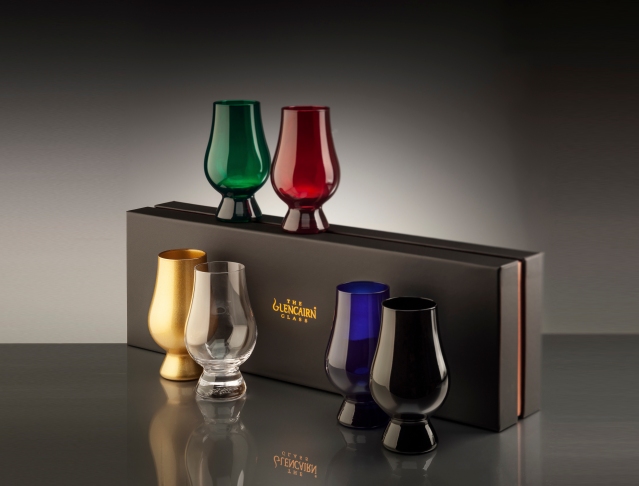 To celebrate the 20th anniversary of the Glencairn Glass, the world’s favourite whisky glass, Glencairn Crystal Studio has introduced a new core range of coloured glasses.

Following the huge popularity of the limited edition black Glencairn Glass last year, whisky fans world-wide will now be able to purchase the Glencairn Glass not only in black but also in blue, red, green, and shimmering gold alongside the original clear glass.

Available both individually or as a full tasting set of six glasses, the new range of coloured glasses has been carefully selected and created to provide visual impact in the hand and on the bar. It has also been designed to be used in, and to enhance, the blind tasting experience by disguising the colour of the whisky.

This year the iconic Glencairn Glass celebrates its 20th anniversary. Since its creation by the award winning Glencairn Crystal Studio in 2000, it has shot to fame as the definitive whisky glass around the world today, with over 3 million being sold each year, across 140 different countries in all seven continents including Antarctica.

“We were blown away by the massive success of our limited edition black Glencairn Glass last year which sold out almost immediately. So in response to public demand, our 20th anniversary gift to loyal fans of the Glencairn Glass across the world is the introduction of this colourful new range, which is here to stay.  Not only are the coloured glasses a fun addition to any drinks cabinet, tasting your dram blind is the perfect way to develop your senses and to learn all about the wonderful world of whisky”.

The new range of coloured Glencairn Glasses can be purchased individually at £8 each, or in a presentation box featuring the full colour range tasting set of five glasses plus the original clear glass at £60. Available at The Glencairn Crystal online store and then also from other retailers later this year.

For more details about Glencairn Crystal Studio and The Glencairn Glass please visit: www.glencairn.co.uk and www.whiskyglass.com

Tagged as: Explosion of colour for the new Glencairn Glass range to celebrate 20th anniversary, News