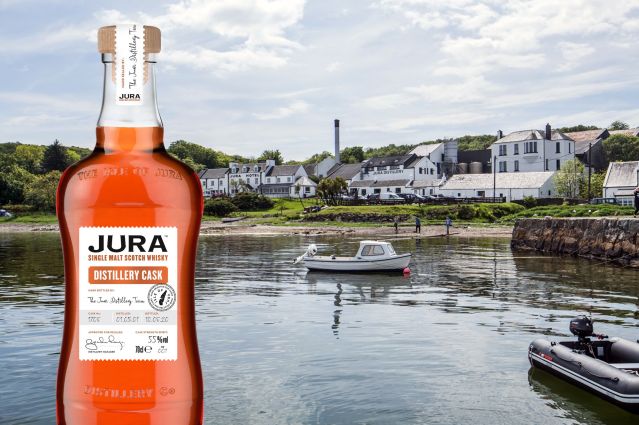 The Jura Whisky Distillery is auctioning 470 bottles of an exceptionally rare 19 Year Old whisky which has been bottled to raise funds in aid of a Scottish mental health charity.

The distillery’s latest release has a full-bodied cask strength ABV of 55%. The special expression was distilled in May 2001 and placed into Jura cask No 1708 before being bottled and hand sealed in August 2020 on the Isle of Jura, home to a tiny island community of just 212 people.

The individually numbered bottles will be auctioned online via Whisky Auctioneer from Friday 25 September until Monday 5 October. All proceeds from the online auction will be donated to SAMH (Scottish Association for Mental Health).

The auction forms part of a wider effort led by Whyte & Mackay employees to fundraise for mental health charities around the world. The team set themselves individual challenges to together clock up enough miles to virtually run, walk, cycle or row around the world.

The challenge – Whyte & Mackay Cares – was inspired by the heroic feats of Captain Tom Moore in the UK. Since starting the challenge in June, the team has virtually travelled twice around the world.

Graham Logan, Distillery Manager at Jura Distillery, said: “Our new charity release is a fantastic 19 year old that has aged for its whole life in an ex sherry butt. The distillation from our fantastically tall stills gives the spirit a light citrus and grassy character. Long summers and protection from the cold by the gulf stream in winter have really helped the maturation process over the years. Once opened the whisky noses wonderfully of fruit, vanilla and toffees, and reminds me of Christmas to taste. This is a classic Jura dram nurtured by our dedicated island team.”

Daryl Haldane, Head of Whisky Experience at Whyte & Mackay, said: “I have been so impressed by my colleagues’ passion to support communities where our colleagues, friends and consumers live during the pandemic. The speed and creativity which has allowed this new whisky to reach public auction is outstanding and I am incredibly proud of the team’s efforts to get us here. All of the funds raised from the auction will go directly to SAMH, a charity which has been instrumental in providing vital mental health support to people throughout the pandemic.”

Iain McClune, Founder of Whisky Auctioneer, said: “Now more than ever mental health is of utmost importance and it’s a privilege to bring this Jura 19 year old to auction in support of such a worthwhile cause as SAMH.

“Our audience of whisky collectors and enthusiasts will no doubt be enamoured by this classic Jura dram and I’m certain the auction will inspire a huge amount of interest both in the UK and further afield”.

The Jura Distillery Cask carries a nose full of liquorice toffee, ginger biscuits, peach and subtle vanilla. On the palate is a rich mouthful of raisins, witha subtle touch of sea spray and  cinnamon. The finish is long and rewarding, with a nutty note of  marzipan.

SAMH has a dedicated Coronavirus mental health information hub for anyone looking for help or support during the pandemic, which can be found on its website – https://www.samh.org.uk/

To find out more about the auction and register your interest, visit https://discover.whiskyauctioneer.com/jura-charity-auction