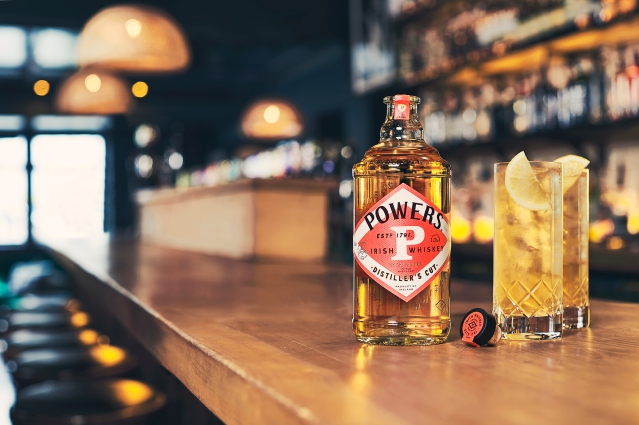 Powers Whiskey arrives in the UK from 31st August, much anticipated by the modern whiskey drinker yet steeped in centuries of history.

Back in 1791, Powers’ founding father James Power created his Irish Whiskey in Dublin using only the center cut of the distillate. Today it is crafted in Midleton, Co. Cork, where every drop has not only been triple distilled, but more top and tail gets thrown away than any other Irish Whiskey. It may be a longer slower process, but the end result speaks for itself.

The launch of Powers Gold Label Distiller’s Cut, is due to excite casual whiskey drinkers and connoisseurs in equal measure, and joins the Powers family alongside Powers John’s Lane Irish Whiskey

Powers Gold Label Distiller’s Cut is a versatile whiskey that can be enjoyed in many ways. Best enjoyed neat or in a Powers Honey Highball, it also works perfectly in whiskey cocktails.

To enjoy as part of its signature serve, the Honey Highball: Fill a highball to the top with ice. Pour 50ml of Powers Gold Label, Add 20ml Honey Syrup and a squeeze of fresh Lemon Juice. Top with premium Soda Water and stir. Garnish with a lemon slice.

Powers is available from 31st August at Waitrose, Tesco at an RRP of £30, and is available in Amazon from September.

Laura Stephen, Pernod Ricard UK Brand Director, comments: “Powers has long been celebrated for its strong history and bold character. It is with great pride that we reintroduce it to UK consumers with a bold new look that features a redesigned bottle shape inspired by the silhouette of a pot still, and a label styled on the icon diamond ‘P’. Powers Gold Label Distiller’s Cut is well positioned to capitalise on the growth opportunity in Super Premium Irish Whiskey, and the launch is set to excite both existing whiskey lovers as well as a new generation of drinkers with a palate for a quality, distillate-driven whiskey.”

Historically one of world’s best-selling Irish whiskeys, the reintroduction of Powers Gold Label Distiller’s Cut in the UK celebrates the whiskey’s illustrious history in Britain which, throughout the years, has contributed significantly to Powers’ global success.