Glengoyne Distillery announces first ever ‘Behind the Scenes’ event 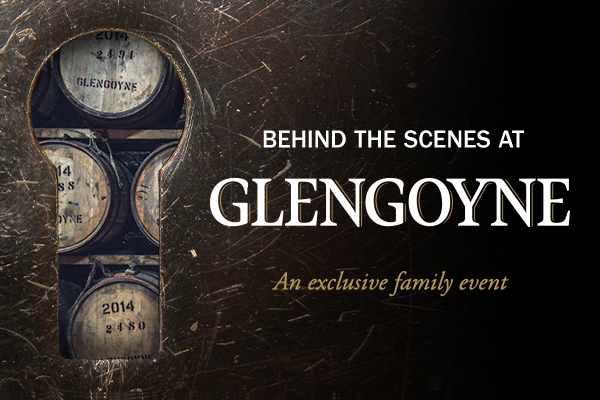 Glengoyne Highland Single Malt has announced its first ever, exclusive ‘Behind the Scenes at Glengoyne Distillery’ event – which presents the opportunity for a few lucky ticket holders to get the keys to the distillery for one day to get deeper insight than ever before into how Glengoyne’s unhurried single malt is crafted.

With only 36 tickets available, ‘Behind the Scenes at Glengoyne Distillery’ will be the most exclusive event held in Glengoyne’s 185-year history, giving extensive insight into its slowly distilled spirit and sherry-cask matured whisky from the real people who make Glengoyne.

Tickets are on sale now, priced at £180 each, and are only available to members of Glengoyne’s online platform ‘The Family’. Non-members can join the Family on www.glengoyne.com.

These lucky 36 ticket holders will not only have exclusive access to the distillery, but they’ll have the undivided attention of the real people who make Glengoyne. Distillery Manager, Robbie Hughes; Malt Master, John Glass and International Brand Ambassador, Gordon Dundas will take the Glengoyne fans through the same whisky-making practises that have been handed down through generations at Glengoyne.

‘Behind the Scenes’ will be held at Glengoyne Distillery, widely considered one of the most beautiful in Scotland, from 10am-4pm on Saturday 16 February and ticket holders will experience in depth tours, hands-on activities and immersive whisky tastings, including an exclusive first taste of Glengoyne’s not-year-released new whisky for 2019. The event will culminate in a three-course, whisky-paired lunch. Attendees will also leave the distillery with a signed bottle of Glengoyne’s much-anticipated new release.

Katy Macanna, Brand Manager for Glengoyne, said: “This is the first time that Glengoyne has closed its doors for a true behind the scenes, exclusive ‘Meet the Maker’ event. We are delighted to be able to give a select group of Glengoyne fans deeper insight than ever before into our unique distillery and its processes.”

To join the Glengoyne Family, please sign up at http://www.glengoyne.com/our-family. Limited tickets are available: only 2 tickets per transaction.

Tagged as: Glengoyne Distillery announces first ever ‘Behind the Scenes’ event, News