By Barry Bradford on July 7, 2018 • ( Leave a comment )
The award-winning Isle of Arran Distillers is launching its latest series of limited-edition
whiskies, this time celebrating the unique beauty of the landscape on the island. The first of
The Explorers Series pays homage to Brodick Bay, which can be found on the east coast of
the Isle of Arran. 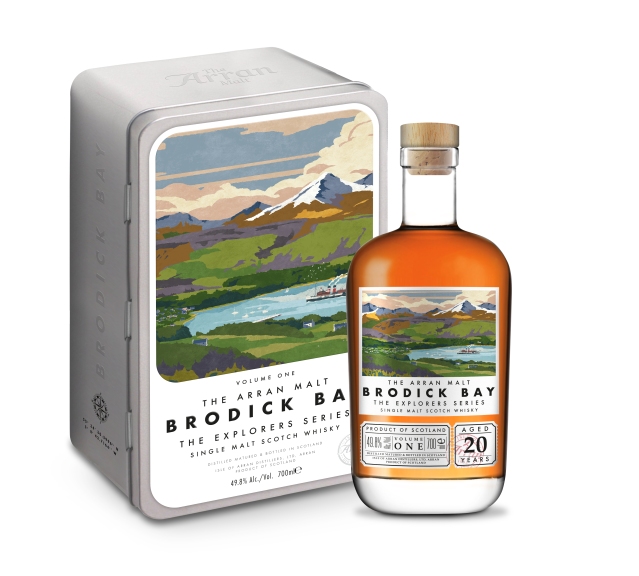 The Brodick Bay whisky has been matured for a minimum of 20 years in both Bourbon
barrels and Sherry hogsheads before being finished in Oloroso Sherry butts, sourced directly
from Bodegas Tradicion in Jerez de la Frontera, Spain. The result is a memorable
sweetness with rich layers of intense fruit.
The first sip of the intense sweetness coats the taste buds as the creamy toffee develops
into a treacle laced fudge. Dark chocolate raisins and honey give this dram delicious depth
which stays long on the palate. Over time or with a drop of water, the Brodick Bay opens up
to show another side with soft oak and hints of pink pepper.
Located 12 miles from the Isle of Arran’s Lochranza distillery, Brodick Bay is backed by
dense woodlands of Scots pine and is guarded by the islands highest peak, Goat Fell. The
bay is surrounded by a vast a unique terrain, ranging from a sandy beach, verdant field, lush
forests and rocky mountain passes.
Speaking about The Explorers Series, Euan Mitchell, Managing Director of Isle of Arran
Distillers, said:

Seeing the natural beauty of this island every day is so inspiring. It felt like
the obvious choice to pay homage to the picturesque scenery through our new limited-
edition series.
This first release is a very complex and multi-layered whisky, which was a conscious choice
to reflect the diversity and charm of the island. All the instalments from The Explorers Series
will be innovative blend of flavours. We want to give whisky lovers something that is unlike
anything else, because to us, there’s nowhere like the Isle of Arran.

The Explorers Series follows the hugely popular Smugglers Series. Launched in 2015, it celebrated the illicit whisky trade that operated from Arran and up the Clyde to Glasgow.

The first instalment of The Explorers Series is available from the Isle of Arran Distillers
Visitor Centre in Lochranza or online at www.arranwhisky.com/shop–whiskies from Tuesday
10 July at 11am. Suggested retail price is £130 for a 70cl bottle and only two bottles can be
purchased by each customer.

Tagged as: First release in landscape inspired series from the Isle of Arran Distillers, News