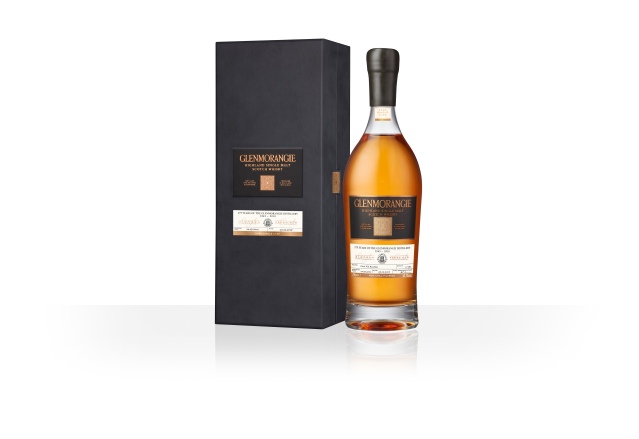 Glenmorangie celebrates the 175th anniversary of its exceptional Highland single malt Scotch whisky with a rare single-cask bottling. Available exclusively to those who make the pilgrimage to the Distillery in Tain, this 16-year-old malt epitomises the smooth, rounded taste which sets Glenmorangie apart.

Glenmorangie has been meticulously crafted on the beautiful banks of the Dornoch Firth since 1843. With just 191 individually numbered bottles created, the anniversary bottling honours the place from which every drop of Glenmorangie flows, to this day.

This celebratory Glenmorangie whisky’s story began with the fragrant, fruity spirit which emerges from the Distillery’s signature copper stills. The tallest in Scotland, their height allows only the finest vapours to reach the top. In late 2001, Glenmorangie’s select craftsmen, the Men of Tain, laid this spirit down in a superior ex-bourbon cask created from American white oak. Skilfully aged in their care, it drew from that first-fill cask all the creamy, vanilla notes and oaky smoothness for which Glenmorangie is renowned.

After 16 years of maturation, the whisky was deemed to have reached its very best. Bottled in 2018, the Distillery’s anniversary year, its character wonderfully amplifies Glenmorangie’s signature smoothness, complemented by the depths that come with age. Fresh and floral on the nose, it has a creamy, distinctive honey and beeswax taste, surrounded by gentle spices, and is non chill-filtered for extra texture and mouthfeel.

Dr Bill Lumsden, Glenmorangie’s Director of Distilling, Whisky Creation & Whisky Stocks said: “This single-cask bottling is the perfect way for us to mark such a seminal year in the Distillery’s history. Its aromas of vanilla and coconut and richly balanced tastes of tropical fruits, spice and oak, offer a unique insight into Glenmorangie’s quintessential style. I hope those lucky enough to own a bottle will enjoy celebrating this landmark anniversary.”