An innovative whisky business that is challenging the concept of blended whisky has just bottled a ground-breaking fusion of Scotch and Indian whisky, revealing that pre-orders are already outnumbering the amount of bottles that will be available.

The newly released E&K whisky is a premium blend of malt whisky from distilleries in Scotland and India. It follows on from The Glover series of whiskies, which were a pioneering blend of Scotch and rare Japanese whisky from the legendary Hanyu distillery. 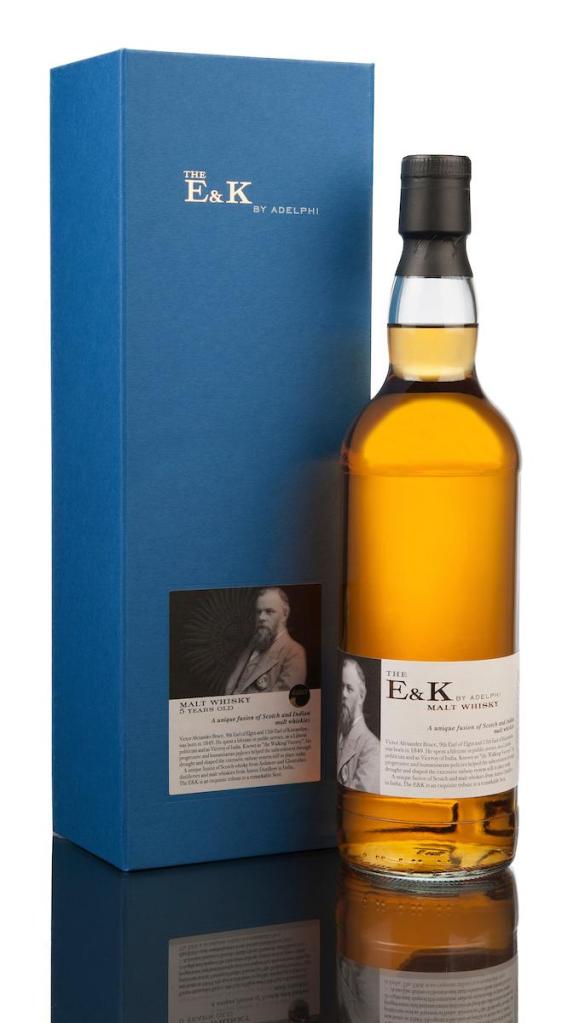 Fusion Whisky, the Edinburgh-based company behind the iconic Glover series of whiskies and The E&K, said its latest limited edition whisky was made from a blend of Scotch whisky from Ardmore and Glenrothes distilleries, and malt whisky from Amrut Distillery in Bangalore, India.  Around 80% of The E&K would be exported to more than 20 countries worldwide.

The whisky was made to celebrate the historic ties between India and Scotland and honour the Scot who helped modernize India’s railways and link the cities of Bombay, Delhi, Calcutta, Madras and Karachi by rail.

Victor Bruce, the 9th Earl of Elgin and 13th Earl of Kincardine, served as Viceroy and Governor General of India between 1894-99. Bruce was a Scottish liberal politician who distinguished himself both in Britain and in India.

Among his achievements as Viceroy of India, Bruce pushed through massive improvements to India’s rail system, helped secure its economy by stabilizing the rupee, pacified its volatile border with Afghanistan, and sought to alleviate the worst effects of drought and famine through a pioneering work-relief programme that saved millions of families from destitution.

After his return to Britain he chaired the Elgin Commission into the second Boer war, which precipitated the reform of the British Army that led to the formation of the British Expeditionary Force.

Fusion Whisky said one of its core aims was to celebrate the lives of Scots who made a positive impact in other countries. Thomas Blake Glover was instrumental in the modernisation of Japan, helping to found, among others, the companies that became Mitsubishi and Kirin Holdings. He was also the first non-Japanese person to be awarded the Order of the Rising Sun.

The carefully guarded recipe for The E&K blend was created by Victor Bruce’s great-grandson Alex Bruce, master blender and managing director of Adelphi Distillery Ltd, based in Fife. The blend is a follow-up to the release last year of The Kincardine whisky, which used Scotch from Macallan and Glen Elgin distilleries expertly blended with Amrut whisky.

Mr Bruce said: “The E&K is a long awaited and exciting blend of Scotch and Indian whisky. When you marry mature Scotch with whisky matured in a different climate you can create some exciting and extremely rewarding flavours, adding new layers of complexity and depth. We found that with The Glover series and with last year’s Kincardine, and I’m sure whisky lovers will agree that we’ve achieved that with The E&K. The Amrut brings tropical fruits and spice, the Ardmore creaminess and sooty smoke, and the Glenrothes adds a sherry-matured richness and texture to complete the balance. Only 825 bottles will be available worldwide.”

Mr Bruce described the blends as an important new addition to the world of whisky, adding: “These blends have their own unique profile, and show both the individual elements that different maturation climates can offer, while at the same time creating a new overall style. It can be a challenge marrying these very different flavours, but I think the outcome with The E&K is fantastic.”

He added: “Being able to create a whisky in honour of my great-grandfather was a real privilege, and I am also delighted to have been involved with a whisky that is both a product and an example of the strong, positive and long-lasting relations between Scotland and India.”

Jim Millar, a director of Fusion Whisky and who drove the Glover concept, said: “The Glover whisky pioneered the concept of using blends of world whisky to celebrate the great internationalism of Scots and the positive historic ties between Scotland and so many countries around the globe.”

The businessman, who was recently awarded Japanese Foreign Minister’s Commendation for his work promoting links between Japan and Scotland, added: “The success of The Glover and The Kincardine, and the incredible demand for The E&K shows that there is strong thirst for this type of innovative whisky, which both tastes stunning and tells the story of some remarkable Scots.”

Edinburgh-based Fusion Whisky has already been singled out for its dynamic approach to collaborative working, with the Fusion team’s partnership with Adelphi recognised in this year’s Scottish Food Awards.

Mr Millar added: “Scotland’s distilling expertise and heritage is world renowned, and rightly so. We’re able to pair these exceptional Scottish whiskies with younger drams from other countries, which have a different production style and different climate or terroir. By blending them, we are creating something utterly unique and utterly brilliant.

“That we can use this pioneering model to showcase remarkable Scots who made a positive impact upon the world, in particular the country from our partner distillery, makes this so much more meaningful as story-telling, heritage and culture are so important to our whisky industry.

“We’ve had the support of Scottish Development International, whose assistance meant we could really drive these new brands, and have researched the identities and come up with compelling characters with compelling stories. We’re very excited about the releases that will follow up The E&K, and think whisky consumers will be too.”

The E&K will be available through select specialist retailers, priced around £135.