According to the Scotch Whisky Association (SWA), whisky made in Scotland must be matured for a minimum of 3 years in Scotland before it can be called Scotch Whisky. Though not wholly relevant to what follows, this requirement has recently been amended to state that it must also be bottled in Scotland, effectively meaning an end to export of 3 year old casks to be matured and bottled elsewhere!

Since the inception of single malt scotch whisky marketing, manufacturers have declared age statements on bottles as a direct measure of their quality. For example Glenfiddich, considered to be the first producer to market single malt whisky in the 1960’s, soon started declaring their product was aged over 8 years. To keep producers honest the SWA added regulations stating that the age statement on the bottle must display the minimum age of any of the maturing casks used to make that bottle. In the case of single cask bottlings this is relatively simple. A product such as the Glenfiddich stable range however are produced from vattings (effectively ‘blending’ but using single malt produced at only one distillery) of huge numbers of casks. This produces large batches of bottles, allowing worldwide distribution of a uniform product. Also the DNA or character of the distillery brand can be effectively reproduced from batch to batch (though intentional or unintentional drift away from this character can also occur with time and changes in personnel as well as to meet market demands or feedback). 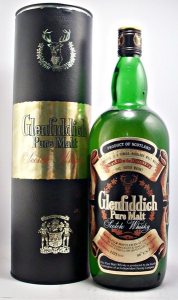 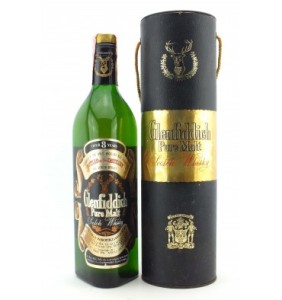 For several decades producers (distilleries, blenders, independent bottles and brand managers/parent companies) have had the option of either producing whisky with a declared age statement on the bottle or with no age statement (NAS). In attempts to market the quality of their products,much emphasis has been placed on whisky age statements. This has led to the popular conception that 18 year old whisky must be better (of higher perceived quality) than 12 year old whisky – even from the same producer. In reality many distilleries use different age statement expressions to highlight different qualities of their whiskies, in some cases even employing totally different maturation methods by using purely ex-bourbon or ex-sherry casks. More commonly both these methods may be used in all age statement expressions but the balance or ratio of bourbon/sherry maturation may be skewed.

From the beginning however whisky has been produced to certain flavour profiles, in which the producer has dismissed the maturation age as bearing any relevance to the final flavour. The best example of these are the numerous blended scotch whiskies (mixtures of single malts and grain whiskies). These are easier understood when considering the use of first fill casks for whisky maturation And the process of maturation itself!

Distilled spirit is is interred into oak cask for maturation. While much of the science is now understood, the reaction between the spirit alcohol and the wood is partly dependent upon th wood itself. As oak is a natural product, each cask stave will be different, and each final cask a product of its individual staves. Being able to recognise good oak wood casks is more of an art, and using these to mature whisky benefits both from great skill and experience. Therefore it is no wonder that whisky maturation experts such as David Stewart (Malt Master at The Balvenie) or Dr. Bill Lumsden (Master Distiller at Glenmorangie) have spent decades experimenting with cask selection and maturation regimes. 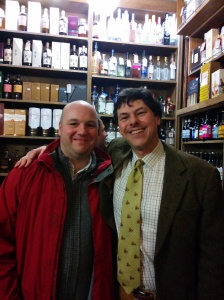 First fill casks can quickly impart strong flavour and colour into the spirit maturing within. Waiting 10, 12, or 21 years for example may result in an almost undrinkable over-matured whisky. On the other hand, bottling when the whisky has achieved its desired intensity of cask maturation may be possible at 4, 7 or 14 & 1/2 years. In the first 2 of these examples this cask would automatically be excluded from vatting into a 10 year old expression as it is too young. In the last example vatting into 10 or 12 year old whisky is uneconomical as it much older and has taken up storage space for longer and is then effectively being sold under cost.

Another trick of maturation is ‘finishing’, pioneered independently at almost exactly the same time (perhaps as early as the 1970’s) by both Lumsden and Stewart, in which whisky is initially matured in a more standard cask (e.g. ex-bourbon) and then transferred or re-casked/re-racked into a cask with different attributes e.g. Sherry, but possibly port, ex-wine (both red and white varietals), rum, the list is almost endless. These are usually first-fill casks, so within a short period of time (months to years) a whole new set of flavour characteristics are rapidly incorporated into the whisky on top of the strong base obtained by the initial maturation. This process can be applied to age-statement whiskies, adding a twist to well matured spirit such as the seminal Balvenie Doublewood and Glenmorangie Wood Finishes series (originally NAS but later settled into 12 Years Old variants), however equally it can be used to beef-up very young whisky, achieving a greater complexity quite quickly using multiple cask influences. 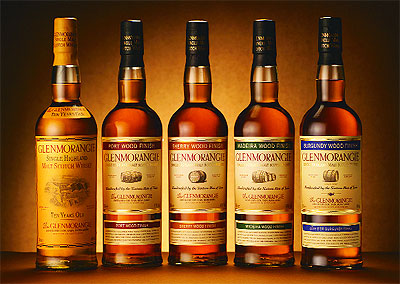 With ever increasing numbers of no-age-statement or NAS whiskies currently flooding the market, whisky aficionado’s, geeks and bloggers alike soon started bemoaning this trend and crying bogus activity by whisky producers. Seen as a get-rich-quick scheme, producers appeared to be replacing well-known age statement whiskies in their portfolio with often more expensive NAS expressions. The presumption being that these NAS expressions were produced cheaper, with shorter maturations. Some producers claim that the pricing of these expressions is reflective of the increased endeavour required to make them, sourcing better quality casks and closer monitoring of them until they reach peak flavour for bottling, rather than the ‘easier’ and ‘lazier’ old-fashioned method of simply waiting for 10 years (!). Either way it is becoming apparent that there are good NAS bottlings and perhaps not-so-good NAS bottlings and it is left for the consumer to decide what they prefer. So with this in mind Oiver Klimek of Dramming.com and certified Malt Maniac set up a blind tasting experiment. The premise basically was to compare a paired age statement and no-age statement whisky of roughly equivalent value from a variety of distilleries and producers and see which was the most preferred. The full results can be found here and revealed only a minor difference in taste preferences from a broad and reasonably well whisky-educated group of test subjects.

Of course as soon as Oliver announced this blind-tasting we here at The Whiskyphiles jumped at the chance to take part. Receiving sample set B of 5 paired whiskies we duly tasted them blind and formed complete tasting notes and analysis and returned our preferences (represented using our usual scoring system) to Oliver. These results were published yesterday (21st June 2015) and the identity of the blind samples finally revealed. Full tasting notes will be posted soon but here is how our results shaped up:

Overall: Thicker and oilier than A but doesn’t carry much flavour- not previously reviewed 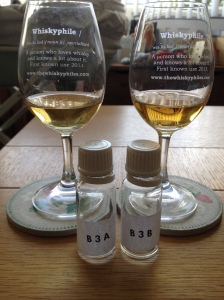 Overall: Abrasive and less complex than A, some underlying pleasant flavours and aromas – previously reviewed and scored 85 points 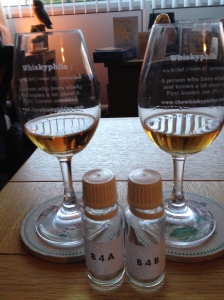 Overall: Thin and bitter in places, oilier and mouthcoating – not previously reviewed

Overall: Spicier than A and a little less bitter – not previously reviewed

So how did we do? Well preferences are preferences and I suspect my sweet-tooth and sherry bias has strongly played a factor within these results. Qualifying Oliver’s statement about Mortlach Rare Old generally returning the lowest scores – this sample convinced me Oliver had thrown us a curve ball here and I was convinced both these samples were not single malt whiskies at all but grain (my suspicion being Cameron Brig 12 year old vs Haig Club). Another bad day at the office for me was the Old Pulteney pairing – a distillery and whisky (12yo) that I profess to love and sample constantly – in my defence I can only suggest that sampling the Navigator (A) first may have subsequently obliterated my palate sufficiently to miss what was going on in (B) – though with each set ample water was used between samples and we returned a short while after to re-sample them in reverse order (allowing time for them to breathe also).

Overall I was quite pleased with our performance and in the last two pairings suspected we were favouring the NAS expressions due to ‘finishing’ effects or flavour profile. Actually both of the last two pairings were very difficult for us to decide a winner from each as they were almost equally as good. I have included prices here from a popular online retailer in the UK to display typical cost for each of these bottlings (actual costs in € can be found in Oliver’s article here). The whole experience was a lot of fun and very educational for us as blind tasters as it inadvertently tested our ability to (fail to) recognise familiar whisky and also recalibrate our scoring (another subject hotly debated!) which we use personally to determine our preferences of one whisky over another – something almost every whisky drinker does but often not in such absolute (numerical) terms.

So lastly it leaves us to thank Oliver for his sterling effort in both putting this together and analysing all the results. Again please read his article here for all the results including the other sample set. It appears the outcome is trust your palate! If the whisky appeals to you and tastes good, then it really doesn’t matter if it carries an age-statement or not.