The Singleton of Dufftown Spey Cascade

Nose Mild and fresh at first, with baked apples and woody fragrance broadening to marzipan and ripe red berries.

Palate Softly coating, with stewed apples and hints of spice. 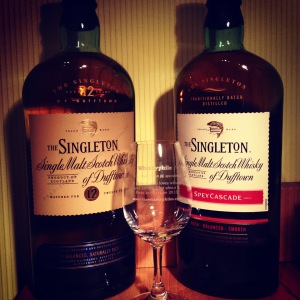 I’ve had a bit of a thing for Singleton of Dufftown since my very first purchase. I bought a bottle of the 12 years old when found on offer at the supermarket. Despite having several other proprietary whisky bottles on the go the Singleton was always my first choice dram until it was finished. I was surprised to learn recently, during discussions centering on the recent Haig club release, that the Singleton is to malt whisky what Haig Club is to grain. Apperantly many years ago (~ 2007) some bright spark at Diageo figured if they packaged up a light and delicate malt (i.e. inoffensive flavour-wise) and marketed it in the right way – then non-whisky drinkers would get into single malt whisky. This was done with three distilleries, Dufftown for Europe, Glen Ord for Japan/Asia and Glendullan for North America. So there are three Singletons!

Recently Diageo have changed tack slightly, with distilleries no longer able to rest their laurels on production of a single expression. This has led to lots of diversification and releases of numerous bottlings from well-loved distilleries. Personally I am mostly in favour of this, though much had been released in a flavour-led, no-age statement fashion. The Spey Cascade is one such of these, using the Dufftown spirit matured in both bourbon and sherry casks to bring something a little different to the party.

Pleasing, beautiful flavours but a little light on everything. This tastes rather young and the balance is firmly in the sherry maturation, though sadly for me not quite enough. A simple session or starter dram. At the start of the tasting people found this a little short, though later some returned to it as it was perhaps more balanced than other whiskies sampled at the tasting?