Stealing Balvenie’s dog , I will always feel a little bad about it but I love it too much to give it back.

On the 6th June 2013 at around 6pm we [The Whiskyphiles & friends] encroached upon the Bonham Hotel to take part in the Craft in Motion tour from The Balvenie. We were entertained for the evening by our master of ceremonies, Sam Simmons The Balvenie Global  Ambassador and his team who ensured we were all enthralled, well-informed and most importantly in possession of a glass full of whisky at all times.

The line up was as follows [tasting notes from The Balvenie as we were having far too much fun to make any!]:

The Balvenie whisky panel ready to answer questions [and ask some too!]

The Balvenie DoubleWood is a 12 year old single malt which gains its distinctive character from being matured in two wood types. Over the period of maturation it is transferred from a traditional oak whisky cask to a first fill European oak sherry cask. Each stage lends different qualities to the resulting single malt ~ the traditional casks soften and add character, whilst the sherry wood brings depth and fullness of flavour.

Caribbean Cask has been matured in traditional oak whisky casks for 14 years, and then ‘finished’ in casks that previously held Caribbean rum.

When he judged the casks to be ready, the rum was replaced with the 14 year old spirit and the wood was put to work adding the final touches.

The result is an exceptional single malt whisky with the traditional smooth, honeyed character of The Balvenie, married with notes of toffee and a hint of fruit, with a warm, lingering finish.

TASTE: Rounded with vanilla and sweet oak notes, with a fruity character that develops with time

The Balvenie Single Barrel is a 15 year old single malt which is drawn from a single traditional oak whisky cask of a single distillation. Whilst each cask is subtly different, The Balvenie Malt Master selects only those casks which have the essential characteristics of The Balvenie Single Barrel, particularly honey, vanilla and oaky notes. Each bottling forms a limited edition of no more than 350 hand-numbered bottles – so each bottle is unique and unrepeatable.

TASTE: Rich and complex, suggestive of years of careful ageing, it has a honeyed maltiness with vanilla, oak flavours and delicate spice notes.

FINISH: Long and complex with a hint of liquorice.

To craft DoubleWood 17 Year Old Malt Master David Stewart, who celebrated his 50th year at The Balvenie in 2012, returned to one of his most celebrated achievements – consecutive maturation in two different types of cask, a process often referred to as ‘cask finishing’.  This technique is at the heart of The Balvenie DoubleWood – it sees the whisky matured first in American oak barrels, which impart soft sweet vanilla notes, before being transferred to European oak sherry casks, where the second cask ageing adds rich spicy flavours and a depth and fullness of flavour.

The DoubleWood 17 Year Old is an elder sibling to DoubleWood 12 Year Old and shares its honeyed, spicy characteristics, but it is distinctly different, with deeper vanilla notes, hints of green apple, creamy toffee and a striking richness and complexity.

TASTE: Sweet with dried fruits, sherbet spice, toasted almonds and cinnamon, layered with a richness of creamy toffee notes and traces of oak and deep vanilla.

NOSE: A perfume of fruity and ripe raisin notes, backed by a nutty dryness

TASTE: Refined with remarkable character, it is creamy and silky with fruit, honey and spice notes.

Later once the whisky had really started to flow we were treated to a short history of why it is that Scotch whisky came to be in the first place by whisky expert and historian Charles Maclean. A story you can read about and much more in some of the many wonderful books he has written and published upon the subject. 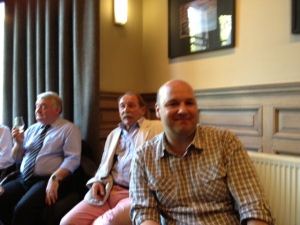 “Oh my! is that Charles Maclean growing out of your shoulder?”

– Thanks to RAB for having the perfect eye for photography

Sam & Co. also gave us an introduction to the dipping dog – a device used by distillery workers to personally acquire cask contents that they perhaps wanted to sample privately. As a boy that grew up in Manchester I find a little ingenuity in the acquisitions department can easily be appreciated – as they say ‘You can take the boy out of Manchester, but you can’t take the Manchester out of the boy.’. It should be noted they don’t say ‘You can take the man out of Manchester…’, because then you just end up in Chester! [Hollyoaks you have so much to answer for!]. 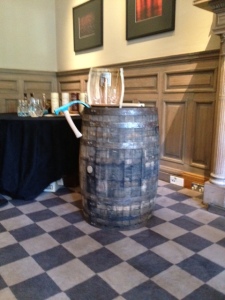 The Balvenie Dipping Dog on display

Quite how we came to take Balvenie’s dog for a walk I don’t quite remember, I distinctly remember Sam suggesting “don’t ask, just beg for forgiveness”. So in the spirit of the dipping dog’s history and my Fiance being a sucker for a cute puppy, we have re-homed him with a very caring and loving family, where he gets to play amongst his sibling bottles of The Balvenie whisky.

Before the night was through Sam & Co. entrusted us all to ensuring none of the bottles had to be taken away with any whisky in them [likely saving them the cost of shipping]. The popular opinion was that the 21 Years Old Portwood created the biggest single rise in room volume – making it the likely top choice. However I and some of my friends went back more often for the 17 Years Old Doublewood as our own top tipple of the evening.

Huge thanks to Sam, Johnny, Charles,The Balvenie and their Masters of Craft tour, and The Bonham Hotel in Edinburgh for a fantastic evening’s entertainment enjoyed  by all.